Historian Arnold Toynbee notes of the three dozen or so human civilizations which have appeared in recorded history, only a half dozen remain. His A Study of History traces the birth, growth, breakdown and disintegration common to all defunct civilizations,[1] and speculates as to what phase living civilizations that remain are passing through.[2] Modern American liberalism exhibits much of the characteristics of a civilization in its final phase,[3] unable to perform the creative acts which gave rise to it, and seeking to normalize deviance in its final breakdown stages before it disappears into extinction or merges with and is swallowed whole by competing civilizations.

The Cloward-Pivan strategy, for example, is a policy devoid of any creative impulses or processes and intended to breakdown and destroy existing societial norms and institutions.

American liberalism became separated from the benevolence of classical liberalism in the late 19th and early 20th century with the immigration of many European communists and socialists.[4] Gradually, American liberalism adopted the harsh tone and rhetoric of class division, class hate, and class warfare. Since the 1960s, this philosophy of divisiveness and hatred of one's opponents has been transformed into identity politics - the hardened belief that one's political views and alliances ought to be formed along racial, economic class, and gender lines, with a totalitarian mindset among believers to enforce compliance.

American perennial presidential candidate of the Socialist party. Norman Thomas said, "The American people will never knowingly adopt Socialism. But under the name of 'liberalism' they will adopt every fragment of the Socialist program, until one day America will be a Socialist nation, without knowing how it happened."[5]

According to the Gallup Organization, in the United States, 25% of the population were liberals and 36% were conservatives in 2016.[6] 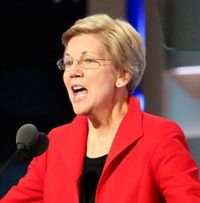 Elizabeth Warren was involved in a identity politics related controversy regarding her claim about having an Native American heritage.[7]

Because she lacked support for her claim and was a vocal critic of Donald Trump, Trump mocked her during the 2016 presidential election and gave her the moniker "Pocahontas".[8]

In 2017, the Financial Times declared about American liberalism:

In 2017, Amie Harris reported at The Hill concerning Hillary Clinton and her reaction to losing the 2016 presidential election:

The website Marketwatch reported concerning the aftermath of the 2016 presidential race: Trump’s win is causing a surge in demand for mental health services[12]

Fox News reported in December of 2016:

FivethirtyEight indicated in their 2017 article Barack Obama Won The White House, But Democrats Lost The Country:

Democrats and most media outlets in the U.S. are blatantly liberal.[17] Liberalism in North America today practices three primary tactics to attack the Republican Party, and sometimes to attack American values in general. These three liberal tactics can be pronounced using the following acronym: SIN. Liberals (1) shift the subject, they (2) ignore the facts, and they (3) name call.[18][19]

The National Journal compiles the votes of each congress member each year and uses the information to create rankings[22] of how liberal each member of the United States Congress is. In addition to showing the voting records of each member and given an overall all ranking of liberalness, the National Journal also ranks congress members by liberalness in the areas of social, economic, and foreign policy.

Due to the explosive growth of global Christianity in traditional cultures and their influence on Western Christianity and the higher birth rate of conservative Christians and religious conservatives, social conservatism is expected to rise.