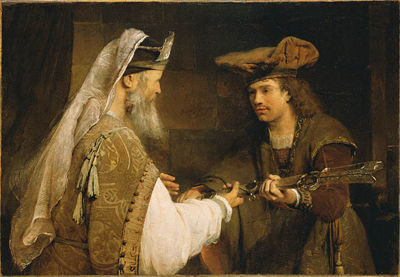 Ahimelech gives David the sword of Goliath.
Ahimelech (Hebrew: אֲחִימֶ֖לֶךְ, brother of the king) (fl. 1067 BC–1064 BC) was the tenth High Priest of Israel and one that had a short and tragic career.[1][2][3][4]

Ahimelech was a descendant of Eli. Some commentators identify him with his elder brother Ahijah.[5] Not all commentators agree with this.[6]

The Bible gives few clues to the beginning of Ahimelech's career. However, the Bible describes its tragic end.

Ahimelech established himself at Nob. David came to him there in or about 2940 AM. Ahimelech asked why David came alone and with only a handful of young men. David told Ahimelech that he was on a secret mission from Saul. He then asked Ahimelech for five loaves of bread, or whatever other supplies he could spare. Ahimelech gave David what was available: some leftover showbread. David assured Ahimelech that he and his men could properly eat this showbread because they had not recently been with any women.

David then asked Ahimelech for any weapons that might be available. Ahimelech gave David the sword of Goliath, which had been entrusted to Ahimelech after David's famous duel with that champion. (1_Samuel 21:1-9 )

Saul summoned Ahimelech to his camp in Gibeah. There he accused him of conspiracy to commit treason and repeated the charges that Doeg had made. Ahimelech denied using the Urim and Thummim for David, but also told Saul that David had been Saul's most trusted servant and therefore Ahimelech would have no reason to doubt that David had full authority to demand every favor that Ahimelech had granted.

Saul, furious, ordered his servants to execute Ahimelech on the spot. Most of his servants were not willing to carry out this order. But Doeg personally executed Ahimelech and another eighty-four priests. Furthermore, Doeg exterminated the entire population of Nob, to the last man, woman, child, and beast. (1_Samuel 22:6-19 )

However, one son of Ahimelech, namely Abiathar, escaped, joined the camp of David, and succeeded Ahimelech as high priest. But he would not be able to perform the functions of a high priest until after Saul was dead.

Jesus Christ cited Ahimelech's kindness to David in furnishing him the leftover showbread as precedent for subordinating Sabbath and other worship regulations to the meeting of human needs.[3] (Matthew 12:1-8 )