Yokohama is an important Japanese city and port, located in the main island of Honshū, near Tokyo Area.

Yokohama is the second Japanese city in population with 3.6 million after Tokyo.

On February 12, 1854, Commodore Matthew Perry anchored off Yokohama with a fleet of American warships. At this time the Japanese signed the Kanagawa Treaty opening two ports, Shimoda and Hakodate, to American ships. In 1858, the US-Japan Treaty of Amity was signed, opening up six ports to foreign trade, including Kanagawa. One year later, the trading rights for foreigners were transferred to Yokohama, a sleepy little fishing village at the time. Thus began the transformation that was to turn Yokohama into one of the most famous port cities in the world.[1] 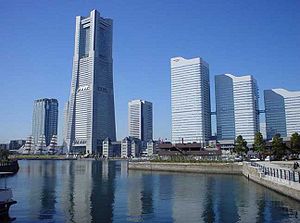