From Conservapedia
(Redirected from Wuhan, China)
Jump to: navigation, search

Wuhan (Simplified: 武汉; Traditional: 武漢; Hanyu pinyin: Wŭhān) is a major industrial city in central China and the capital of Hubei province, with a population of 9.1 millions. Lying at the confluence of the Yangtse (Changjiang) and Han rivers, is a triple city, comprising the formerly discrete cities of Hankou (Wade-Giles: Hankow), Hanyang and Wuchang.

The center’s “leading mission” is the National Cybersecurity School, whose first class of students graduate in 2022. Ultimately, The center also hosts the Talent Cultivation and Testing Center. Chinese military strategists view cyber operations as a possible “Assassin’s Mace” (杀手链): a tool for asymmetric advantage over a superior force in military confrontation.

The NCC hosts two non-private laboratories, the Combined Cybersecurity Research Institute and the Offense-Defense Lab. Both institutions likely conduct cybersecurity research for government use. China’s Military-Civil Fusion strategy ensures that the People's Liberation Army can acquire new tools that come from the NCC, regardless of who develops the tools, which may help China develop asymmetric advantage.

The CCP wants indigenous replacements for foreign software to protect its military and critical infrastructure from foreign interference. To this end, a local government report shows that policymakers intend to harvest indigenous innovation from the NCC. Citing important Party organs, the report states that “leaders have repeatedly made it clear that the National Cybersecurity Base must closely monitor independent innovation (自主创新) of core cybersecurity technologies, promote Chinese-made independently controllable (自主可控) replacement plans, and build a secure and controllable information technology system....” Local officials serve as a pipeline between the NCC’s ecosystem and the needs of the Party by targeting nascent technologies.[1]

Wuhan Institute of Virology (WIV) is a laboratory administered by the Chinese Academy of Sciences under control of the CCP Discipline Inspection Commission. The lab is near the site where the Communist Party of China claims the Wuhan virus was first detected in December 2019. The lab received a total of $7.4 million in grants from the National Institute for Allergy and Infectious Diseases, a U.S. agency led by Dr. Anthony Fauci.[2] In 2015, the lab was upgraded to biosafety level 4 (BSL–4) with the help of French engineers. It is first such lab in China. SARS escaped from a Beijing lab twice in 2004 and the upgrade was intended to address this problem.[3]

In January 2018 U.S. embassy officials in Beijing warned about safety risks at the Wuhan lab researching infectious diseases, including coronaviruses from bats. One of two "Sensitive but Unclassified" U.S. State Department cables warned about biosecurity and management problems at the lab.[6]

Dany Shoham, a former Israeli military intelligence officer who studied Chinese biological warfare, said the Wuhan Institute of Virology is linked to Beijing's covert bioweapons program. He said the secure Wuhan National Biosafety Laboratory at the institute was engaged in research on the Ebola, Nipah and Crimean-Congo hemorrhagic fever viruses.

The Wuhan virology institute is under the Chinese Academy of Sciences, but certain laboratories within it “have linkage with the PLA or BW-related elements within the Chinese defense establishment,” he said. Suspicions were raised about the Wuhan Institute of Virology when a group of Chinese virologists working in Canada improperly sent to China samples of what he described as some of the deadliest viruses on earth, including the Ebola virus.[7]

In February 2020, Major General Chen Wei, described as China's top biowarfare expert, was placed in charge of the lab.[8] CCP boss Yuan Zhiming denied that his lab is the source of the Wuhan virus.[9]

Urban development began during the Han dynasty (roughly contemporary with the Roman Empire), and Hanyang and Wuchang were walled c. 206-223 AD. During the Taiping Rebellion fighting between Taiping and Imperial forces ebbed and flowed several times across the Wuhan region. A military mutiny in the Wuchang Garrison on 10 October 1911 (the 'double ten') sparked the 1911 Revolution in China. The triple city achieved further strategic significance when the Belgian-financed Beihan (Beijing-Hankou) railway was opened as part of a trunk line linking Beijing to Guangzhou (Canton). In 1927 Nationalist (Kuomintang) forces occupied Wuhan in the course of the Northern Expedition of 1926-28. Nationalist crowds thereupon overwhelmed barricades erected by Western forces and occupied the former foreign cioncessions in Hankou (and also at Jiujiang, downriver of Wuhan). This was the first occasion on which settlements had been recovered, and the fait accompli was later accepted by the powers. In the late summer and autumn of 1927 Wuhan was the centre of a short-lived Left-Kuomintang government headed by Wang Jingwei and Song Qingling (Madame Sun Yat-sen) following Chiang Kai-shek's Shanghai Coup in which he had turned on and massacred his erstwhile Communist allies. Wuhan briefly served as temporary capital of the Republic of China following the Japanese invasion in 1937 and occupation of Nanjing. Wuhan was in turn occupied by Japan and the Chinese capital removed further inland, to Chongqing (Chungking). In 1957 a 1.6 km long road and rail bridge was opened across the Yangtse at Wuhan. A second bridge was opened in 1995 and a third in 2000.

Wuhan has numerous twin cities, including Manchester and Pittsburgh

Wuhan was the first major metropolitan area in the world to rollout 5G technology on October 31, 2019 on an experimental basis. High levels of radio frequency (RF) radiation has long been known to be harmful for humans and the environment. Despite the industry's sales pitch, 5G technology massively increases exposure to radio frequency (RF) radiation greater than the 2G, 3G and 4G networks for telecommunications already in place.[10]

Chinese researchers indicate the novel coronavirus may have begun human-to-human transmission in late November 2019 from a place other than the Huanan Seafood Market in Wuhan. A study published on ChinaXiv, a Chinese open repository for scientific researchers, reveals the new coronavirus was introduced to the seafood market from another location, and then spread rapidly from market to market.[11] 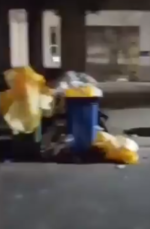 Trash bin full of ashes after 1 day at a Wuhan crematorium.[12]

The pandemic spread as a result of human-to-human transmission beginning in Wuhan. As it metastasized, the World Health Organization (WHO) parroted the Chinese Communist Party line that the Wuhan virus could not be passed from one human to another, and that it was “racist” to refer to the virus by its place of origin.[13] Director General Tad Adhamon criticized travel bans to and from China where the deadly outbreak first occurred saying, "There is no reason for measures that unnecessarily interfere with international travel and trade."[14] The WHO was not allowed into China by the Marxist regime until February 10, 2020,[15] more than two months after the virus was first discovered. President Donald Trump offered China any help necessary.[16] The leftist regime, with its trademark monopoly control of power, banned private charities and volunteers from entering Hubei Province or sending materials to hospitals directly.[17]

The Chinese central government, a single party regime, stifled public warnings about the epidemic for three weeks after the first confirmed inflections in early December 2019.[18] The local Communist-controlled Wuhan government was instructed by the central authority not to issue health alerts until after the virus was spread throughout the country and internationally. The Beijing central government in turn blamed local officials for allowing people to exit the city and put the rest of the population in danger.[19]

In Wuhan, the "Chicago of China" with 11 million residents, all public transportation was halted. Gas stations were closed. Paramedic emergency services halted. Hospitals were packed and emergency phone lines do not work. There is no way to get to a hospital other than walking. Healthy people waiting for testing in hospitals are becoming infected.[20]

The outbreak occurred during the Chinese New Year holiday when people travel to spend time with family and friends, then return to their homes across China and the world.[21] 5 million people had exited Wuhan, including about 2,300 departing international air flights, before the city was put on lock down on January 23, 2020. There are about 360,000 students from China attending college in the United States. The leftist regime made no provisions for a humanitarian disaster after the lockdown.