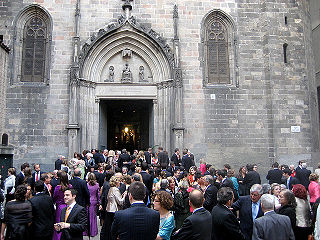 White people also called Caucasian is a 19th century term for the white race or people of white European origin. The definitions of the term "white" have changed over the years.

Whites have less melanin pigment in their skin than other human beings. Darker-skinned people regard them as "white" in contrast to themselves, (see skin color). The term grew out of belief at the time that European languages originated in the Caucasus (mountains between the Black and Caspian Seas), but this turned out not to be true, so the word "Caucasian" (like "American Indian") is in fact a misnomer.

Whiteness in many countries is associated with social status. This association is negative in the U.S. and much of Europe (because darker skin among Caucasians indicates they have leisure time to be outside and get tanned[1]). In Latin American,[2] South and East Asian[3] countries, light skin is considered more attractive and is associated with greater wealth. The association between whiteness and social status is mixed in modern and indigenous African cultures.[2][4][5] Before the Industrial Revolution, light-skinned Caucasians were perceived as having higher social status because most workers worked outside.[1]