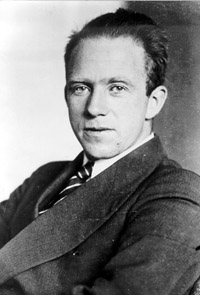 Werner Karl Heisenberg (December 5, 1901 – February 1, 1976) was a German physicist and Nobel laureate (1932), most credited with the discovery of quantum mechanics, in 1925. Heisenberg proposed that it is impossible to assign to an electron a position in space at a given time or follow it precisely in its orbit. Heisenberg thereby challenged the model of subatomic particles that was based on planetary orbits. Instead, Heisenberg suggested that mechanical quantities like position and velocity are better represented, not by ordinary commutative numbers, but by non-commutative mathematical objects called matrices. He had this historic moment of insight in June 1925 while on the treeless island of Helgoland in the North Sea while sitting on a very large rock on the shore.[1][2] [3]

Heisenberg formulated a famous principle that now bears his name: The Heisenberg Uncertainty Principle (1927), one of the central principles of modern physics. This principle states that the determination of the position and momentum of a mobile particle always contains errors which, when multiplied, cannot be less than the quantum constant h. These errors are negligible in most of ordinary life but not only significant in the study of subatomic particles. Quantum theory is essential for a valid description of molecules including pharmaceuticals as well as for the description of physical properties (electrical conductivity, magnetism, ...) of solids, in particular semiconductors. Some modern equipment, such as computer chips, lasers or the scanning tunneling microscope, take advantage of effects, which can only be understood through quantum theory.

The need to give up the certainty of simple mechanical and other models and to introduce the uncertainty principle in order to understand and describe some physical effects also inspired to question the certainty in other fields.

During world war II Werner Heisenberg worked on developing the atomic bomb for the Nazi party. After the defeat of the Nazi regime, the American government offered Werner Heisenberg a position at Princeton University instead of charging him with war crime, which he accepted.