Snow-covered Kanaga Volcano in Alaska erupts a small column of tephra, gas, and steam. Kanaga is a stratovolcano. View is toward the west.

A volcano forms when molten rock, in the form of lava, is able to breach the surface of the Earth. Many volcanoes take the shape of mountains, although some are so large that they form entire islands, as is the case of Mauna Loa. Volcanoes come in three main types, stratovolcano (also composite cone), shield volcano, and cinder cone. Stratovolcanoes are renowned for their explosiveness, which is cause by the high viscosity of the magma they contain. They can grow to be very large and have steep slopes, but in some eruptions can blow themselves apart. In contrast, shield volcanoes contain magma of very low viscosity, resulting in less violent eruptions and shallow slopes. Finally, cinder cones form very fast and consist of amalgamated igneous materials. They have very steep slopes and are susceptible to erosion. 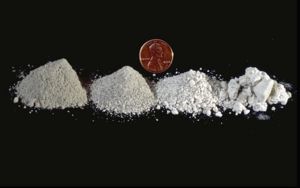 Tephra is a general term for fragments of volcanic rock and lava that are blasted into the air by explosions or carried upward by hot gases in eruption columns or lava fountains. Tephra includes large dense blocks and bombs, and small light rock debris such as scoria, pumice, reticulite, and volcanic ash.

As tephra falls to the ground with increasing distance from a volcano, the average size of the individual rock particles becomes smaller and thickness of the resulting deposit becomes thinner. Small tephra stays aloft in the eruption cloud for longer periods of time, which allows wind to blow tiny particles farther from an erupting volcano.[1] Cross-section through Long Valley Caldera. The valley is one of the Earth's largest calderas.