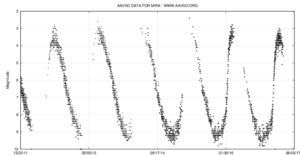 The light curve of the variable star Mira, showing how its brightness changes regularly over time.

A variable star is a star whose luminosity varies significantly over time.[1] Many stars vary a little (the Sun's brightness varies periodically by around 0.1% every 11 years in accordance with the sunspot cycle) but the term "variable star" normally refers to stars whose luminosity varies by large amounts, often a couple of magnitudes. These changes in brightness are often periodic though this is not always the case. Variable stars are grouped into two types, intrinsic and extrinsic, depending on whether the star's brightness changes are caused by the star itself or its environment. As of 2018, 52,011 variable stars have been discovered, with examples including Algol and Antares.[2][3]

The observation of variable stars may have a long history. It has been suggested that the Ancient Egyptian's may have been the first civilisation to have recorded an observation of Algol, a variable star.[4][5] The variation in Algol's brightness can be seen with the naked eye and the Egyptian's recorded a period for an unknown object of 2.850 days which is what the period of Algol would have been 3,000 years ago.

The first modern observation of a variable star (excluding novae and supernovae the oldest record of which is likely from 185 AD)[6] was made by David Fabricus in 1756.[7] The star was called Omicron Ceti and was renamed Mira, meaning "miraculous" in Latin, following the discovery of its variability. Similar to Algol, Mira's variable nature may have been recognised by the Babylonians, though this is disputed.[8] Later in 1638 Johannes Holwards discovered that its luminosity varied in a periodically fashion, with a period of some 330 days (11 months).[8]

Algol was in fact the second variable star discovered.[7] It was first observed by Geminiano Monanari. A modern measurement of its period would not be determined until 1783 through the effort of Nathaniel Pigott, Johann Palitzch and John Goodricke.[8] The following year Goodricke explained that the alterations in Algol's brightness were due to it being a so-called eclipsing variable. Chi Cygni was discovered in 1686 and a total of 7 variable star would be discovered in the following 80 years.

Variable stars are classified as intrinsic or extrinsic depending on the cause of the variation. In intrinsic variable star, the star itself changes as these changes produce a variation in its luminosity. In extrinsic variables, the variation is due to external factors in the star's environment such as one star passing in front of another. These are divided into pulsating, eclipsing and cataclysmic variable stars, each of which is sub-divided into many classes such as Cepheids.

Pulsating variables are a type of intrinsic variable.[3] Unsurprisingly, these pulsate, with the star continually expanding and then contracting. This results in the surface area of the star changing which is the cause of their variability.[1] Pulsating variables tend to be periodic, with periods ranging from 1 to 1,000 days.[7] Classes of pulsating variables include:

Example of an eclipsing binary, demonstrating the change in apparent magnitude as seen from an observer.

Eclipsing variables occur in star systems with more than one star, such as binary systems.[1] When observed through a telescope, the two stars may not be resolved so the two stars appear as one. When one star passes in front of the other, it obscures some or all the light from the other star causing a dip in the apparent brightness of the star system. Both Algol and Antares are examples of eclipsing binary systems.

This can be used as a technique for discovering binary star systems. By measuring the light curve (how the brightness of the system varies over time) various parameters such as the period and distance between the stars can be determined.

Sometimes referred to as "explosive variable stars," these occur due to changes in nuclear processes that occur deep within the star generating sudden changes in the star's output.[7] This class included supernovae, where a star can become a hundred million times brighter than usual and outshine their galaxy, and novae, where matter acretes onto a white dwarf star.

There are other less common causes for a star's brightness increasing and decreasing. One is due to the rotation of a star and its natural variation in brightness across is surface.[3] This tends to be a very minor effect for most stars. One exception are pulsars which have generate a beam of radiation along their magnetic axis. Another is due to emissions from the star such as flares or coronal mass ejections from the star's surface. These form a class known as eruptive variable stars or flare stars. Such stars usually have irregular cycles.