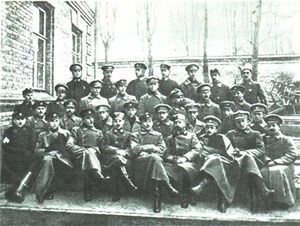 They were formed in 1914. The first volunteers in the unit were members of various existent Ukrainian paramilitary organizations. Initially, 2500 of them were accepted into the military and sent to the Russian front in the Carpathian Mountains. However, at their height they had over 8000 men.

After the Treaty of Brest-Litovsk, they began to grow in importance to Ukraine. After allying themselves with the West Ukrainian People's Republic, they took part in the Battle for Lviv against Poland, but in April 1920 the regiment suffered heavy losses in battle and was surrounded by the Polish army so on 2 May 1920 it was forced to capitulate. Nonetheless, the officers and soldiers of the unit went on to take part in the formation of the Sich Riflemen of Kyiv, and the Ukrainian Galician Army.