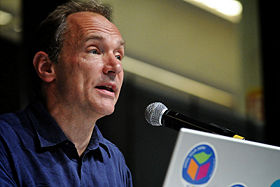 Sir Timothy (Tim) Berners-Lee, KBE, is a British software developer who was the primary inventor of the World Wide Web. In 2004 he was knighted for his services to the global development of the Internet.

Whilst working at CERN (a particle physics laboratory in Switzerland) in 1990, Berners-Lee came up with the idea of using the Internet to link hypertext documents. He designed the first web browser and web server, and in 1991 CERN created the world's first website. Berners-Lee has remained an active participant in World Wide Web development ever since. He now lives in the United States and is the Director of the World Wide Web Consortium.

Berners-Lee is the author of "Weaving the Web".

And if there ever was a thing that was made by committee, the Internet — with its protocols and packet switching — is it. But the World Wide Web is Berners-Lee's alone. He designed it. He loosed it on the world. And he more than anyone else has fought to keep it open, nonproprietary and free.[1]

On March 18, 2013, Berners-Lee, along with Vinton Cerf, Robert Kahn, Louis Pouzin and Marc Andreesen, was awarded the Queen Elizabeth Prize for Engineering for "ground-breaking innovation in engineering that has been of global benefit to humanity."

In 2014, Berners-Lee received a $500,000 prize for being honored with the Mohammed Bin Rashid Foundation Knowledge Award.[2]

Berners-Lee is a proponent of net neutrality.[3]