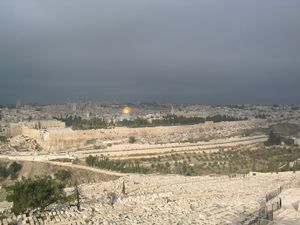 The Third Temple refers to the eschatological hope, in Judaism, of the reconstruction of the Temple by the Messiah upon his coming to Earth from Heaven.

Of course, Christians believe that Jesus was the Messiah, and many - like Augustine - equate the "Third Temple" with the metaphorical City of God, which endures forever.[1] However, this metaphorical interpretation of prophecy is very much held within Amillennialism.

This prophesy has been interpreted to mean that the Third Temple must be rebuilt before the end times so that the anti-Christ may be seated there. At the time this letter was written, the temple was still standing. So the Paul might not have thought of it as something that required rebuilding.[3]

Many Christians who believe in Premillennialism believe that the third temple will be rebuilt at some point in the future. Prophecy teachers such as Tim Lahaye consider that the seven year peace contract made between the Antichrist and Israel, will grant the Jews the right to reconstruct the temple. Some teach that it could be built adjacent to the Dome of the Rock.