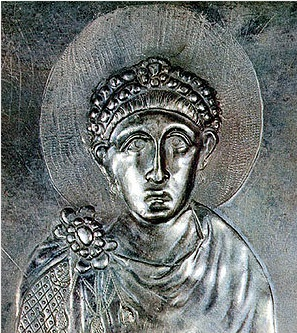 Theodosius (full name: Imperator Caesar Flavius Theodosius Augustus) was born in Spain in AD 347. He was appointed Emperor of the East by Gratian when he was thirty-two. In AD 380, he passed De Fidel Catolica (also known as the Edict of Thessalonica), a law which required all people except for the Jews to follow the orthodox nicene creed of the churches of Rome and Alexandria. Over the years, he destroyed pagan temples and Arian churches, and turned those he preserved into Catholic basilicas.

In AD 392, the western emperor Valentinian II was killed by the pagan Magister Militum Flavius Arbogastes, who made a pro-heathen Christian named Eugenius the emperor in the west. Outraged at the murder of Valentinian and the pagan restoration, Theodosius gathered up his army to stop the Pagan attempt at reviving Polytheism in the Empire. At the Battle of the Frigidus in AD 394, his armies defeated those of the west. Eugenius was killed. Arbogast fled into the mountains and ended up killing himself—the end for a wicked coward. Now Catholicism was enforced across the empire.

But on January 17, AD 395, Theodosius died in Mediolanum as a result of disease. His death would result in the final division of the Roman Empire into two parts ruled by his young and inexperienced sons, Arcadius and Honorius. Theodosius's death is one of the causes for the decline and fall of the Western Roman Empire. His religious polices would see Nicene Christianity becoming the official state religion of the Roman Empire with the Edict of Thessalonica and the dominant religion in the Empire. Arianism by the end of his reign was dying and it was only found virtually in several Germanic Barbarian Tribes who had been converted to Arian Christianity by Arian proselytizing Heretics.