From Conservapedia
(Redirected from The New York Post)
Jump to: navigation, search

The New York Post is a conservative tabloid newspaper owned by Rupert Murdoch, who also owns Fox News. It is the 13th oldest paper in the United States, started in 1801 by Alexander Hamilton as the New-York Evening Post.

The New York Post is one of the few publications that has been critical of prominent liberal Ted Kennedy.

However, like the globalist Rupert Murdoch and Fox News, the New York Post has often been inconsistently conservative. For example, they have called Donald Trump, Jr. an "idiot."[1] The outlet has also called on President Trump to ban assault weapons.[2]

Biden family text with Hunter telling his sister Naomi that thier "Pop" Joe Biden received 50% of the Burisma kickbacks.[3] 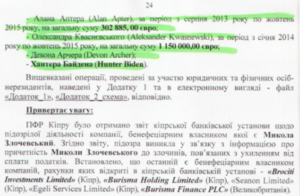 For first time in American history social media companies took direct action against a major U.S. publisher,[8] The New York Post when it published a story on former VP Biden's collusion with Ukrainianian gas giant Burisma executives and Ukrainian oligarchs.[9] The Post is among the top five newspapers by circulation in the United States.

One email from a Burisma executive reads,

Former Vice President Biden has repeatedly lied about having any knowledge of his son Huner's dealings with Burisma. Hunter Biden earned in excess of $3 million while serving on Burisma's board of directors during the Obama administration. The former vice president bragged to the Council on Foreign Relations that he threatened the President of Ukraine with withholding $1.8 Billion in foreign aid and loan guarantees, which the former vice president was in charge of, unless a prosecutor investigating Burisma kickbacks to the Biden family was fired.

The former vice president's son, Hunter, never visited Ukraine, did not speak Ukrainian, had no experience in the oil and gas industry, received over $50,000 a month in wire transfers from Burisma in which he paid half to his father,[10] was dishonorably discharged from the Navy for cocaine addiction, returned a rental car with crack and paraphernalia in it,[11] had a baby out of wedlock whom he refused to pay child support for until ordered by a court while he was having an affair with his widowed sister-in-law.[12] Biden was paid $3.5 million from the wife of the Moscow mayor to launder $200 million in violation of the Magnitsky Act.[13] Tens of thousands of dollars in payments to an Eastern European prostitution and human tafficing ring were also discovered.[14]

On April 18, 2014 Hunter was appointed to the board of directors of Burisma. According to The Hill Biden's firm, Rosemont Seneca Partners, was receiving regular payments—“usually more than $166,000 a month”—from Burisma. The payments ran from the spring of 2014 through the fall of 2015 and reportedly totaled more than $3 million. In a text message from Hunter Biden to his sister Naomi, Hunter said that "Pop" takes 50% of his salary.[15] Biden was hired by Mykola Zlochevsky, who previously served as Ukraine's ecology minister. Burisma came under investigation in 2015. The prosecutor traced payments made to Hunter Biden. Vice President Biden threatened to withhold $1 billion in U.S. loan guarantees and aid unless the prosecutor investigating Hunter Biden was fired.[16] Joe Biden bragged about having caused the firing of the Ukraine prosecutor to a Council on Foreign Relations conference: