The Black Book of the New Left 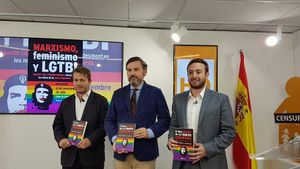 The Black Book of the New Left: Gender ideology or Cultural subversion (El libro negro de la nueva izquierda: Ideología de género o subversión cultural) is a book written in 2016 by Agustín Laje and Nicolás Márquez that denounces Cultural Marxism, the origin of it and its history. The book also opposes Third Wave Feminism, gender ideology, abortion, Indigenism and the homosexual agenda and sees them as Cultural Marxism.

The book also shows how the Left re-invented itself after the fall of the USSR, especially how part of the Latin American Left abandoned violent acts in order to form parties, participate in democracies and adopt many forms of Cultural Marxism that it uses to this day. The Sao Paulo Forum is responsible for this new Latin American Left that even advocates for amnesty to Left-wing terrorism.

The book has generated awareness about these topics around all Latin America, causing a great deal of baseless criticism from the Left in reaction.

In August 2019 the book was published in English.