This article completely ignores the philosophy and history of evironmentalism and intstead focuses on conpiracy theories and a few contraversial individuals. Even wikipedia is better than that! --Mr.Zombie

Why does the first section of this article reference Sheryl Crow's proposal to limit toilet paper use? It seems to me that that is an obvious attack on the environmentalist mindset. I can assure you that most environmentalists do not share Crow's mindset and have more reasonable solutions to environmental problems. Perhaps a history of environmentalism would be better suited for the beginning of this article. I'd make the changes but my account's on probation.

Give a pat on the back to whoever changed this article from hateful Environmentalist bashing to something that's certainly more pleasant. Good job.

Give some justification as to why claim is appropriate. Alot of people that call themselves environmentalists do seek to protect the environment. Claim gives the impression of people saying one theing and doing something else. -Gasmonkey

from the ATTAC REPORT:

I'm an environmentalist and I don't belong to Greenpeace. Great job at generalizing there cheif. Just because ONE group of a FEW environmentaly minded people at some times go too far and commit crimes you generalize that to all environmetalists? Seriously, congrats on that. Are you a Christian? Well, then you are proably an Aryan skinhead too by your logic. After all, they claim to be Christians too.

I'm a corncerned environmentalist about the environment, too. That's why I thought my lagunage was pretty good.. What we are discussing here is organizations claiming to be environmentalist, which may have other agendas. I'm sure we can get some gound language rounded out. RobS 23:45, 15 March 2007 (EDT)

Dominion over the Earth

I have a simple question. As a university student studying environmental science, I feel that the preservation of our natural environment should be, as humans, one of our top priorities. I must admit, I never went to church very often as a youth, and so my grasp of the Bible is a little shaky. What does it mean that people should 'dominion over the Earth', and how does this statement contradict with the philosophy of environmentalism? DanielS 07:07 November 2008 (EDT)

American, you were on to something, and it's even poetic, but it gets a little sarcastic at the end. I'll try and save what I can. This part,

There's an initial Eden, a paradise, a state of grace and unity with nature, there's a fall from grace into a state of pollution

Where is the sourced information for this section? The only source in it is a link to some speech Michael Crichton made. How is he an expert on any of this? Please clarify, or let's get rid of it. --Colest 16:04, 11 May 2007 (EDT)

Tis hilarious. Especially the Al Gore picture. I'm going to find me some other 'hilarious' pictures to plaster all over the site. Should be some good George Bush ones. --WikinterpreterLiaise with the cabal?

And let us not forget about how mockery is a tool exclusive to the liberal repetoire. Oh and it's good to see how it all got put back with no attempt at an explination. --Colest 18:06, 11 May 2007 (EDT)

Well cited? I like ATTAC: (I quote directly) which describes itself as 'A Hasidic Analysis of World War III'. The link up, which draws lines from Greenpeace, and the Sierra Club, to 'revolutionary communist terror cells', has had me laugh quite a bit. It's almost as good as this. --WikinterpreterLiaise with the cabal?

My mockery comment was more directed at the purposeful choice of pictures of liberals that make them look either 1) goofy or 2) sinister. --Colest 18:47, 11 May 2007 (EDT

Shall I replace it with 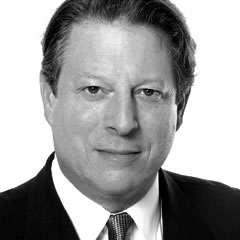 this? I'm not sure having a picture of Al Gore serves any purpose beyond that which I would be loath to accuse RobS of. --WikinterpreterLiaise with the cabal?

And furthermore, can you explain what any of that has to do with environmentalists? It seems to me if you want to write about Gaia worshipers that should be moved to a different topic. You seem to be looking for the most ridiculous information you can find and trying to stereotype all environmentalists as nut jobs. --Colest 18:54, 11 May 2007 (EDT)

pie+enviromentalist brings up 174,000 Google hits. [3]Perhaps we should include a section on how enviromentalists like pie?MatteeNeutra 19:07, 11 May 2007 (EDT)

Mattee brings up a good point, I'm not sure how Google hits validates an argument. If you want to have an article about Gaia worshipers, I don't have any problem with that. But as it appears in this article, you are mischaracterizing all environmentalists as being part of some new age religion. --Colest 19:16, 11 May 2007 (EDT)

Environmentalist + Conservative - 654,000 hits, therefore all environmentalists are conservative. Wuh? RobS, you're going to need some better proof. Anyway, 67900 of your sample above are about Lovelock, so it's not exactly compelling. All I can say is - search engines do nothing to prove/disprove hypotheses. --WikinterpreterLiaise with the cabal?

RobS, why was that edit reverted? You were given ample time to respond here, but you didn't. In 24 hours, I'm going to revert if you haven't explained why here. --WikinterpreterLiaise with the cabal? 14:48, 14 May 2007 (EDT) Note the timestamp.

Yes. Read the people questioning whether we need a picture of Gore at all. I'd rather not attribute you with the motives I think you're trying to push with that picture. Oh, and do you want me to write that section about the conservative environmentalists who like pie? --WikinterpreterLiaise with the cabal?

So what. Quayle misspelled potato, but never ran as his parties nominee for President. On the otherhand, Gore is a larger historic figure, and we have sourcing defining exactly what he stands for, represents, and believes in. This is much more relevent than a simple common mistake someone who served in the same office, yet his opponents are intent upon never forgetting (read the Conservapedia article on Dan Quayle, it was created precisely for this reason. No mention whatsoever of any accomplishments that lead him to that office). RobS 14:59, 14 May 2007 (EDT)

What does that have to do with whether Gore needs a picture? There are (three) pictures on Al Gore, not one of them very flattering, though that doesn't matter. You haven't really answered my question. Here some issues -

What do you want me to do? Anyway, we're discussing this article, here, and how we should improve it - so answer the question. --WikinterpreterLiaise with the cabal?

Can we also distinguish between conservation (as in, let's not use it up but make it last) and "environmentalism"? A case in point is ivory. I heard many years ago that hunters were driving elephants to extinction to get their ivory tusks, and that bans ivory export were only driving up the price and tempting poachers to take greater risks. But then I heard of some country which decided to manage herds of elephants to "farm" them for their tusks as a business. (Kind of like raising minks or chinchillas for their fur.)

It's something like the way Weyerhauser manages forests so they can cut down trees to make paper. Their total cubic feet of "living wood" is constantly increasing. Their profit motive keeps them from cutting all the trees down. They are thinking decades ahead.

Many so-called environmentalists aren't concerned with forest destruction or animal extinction. They want NO USE of trees or animals. Nature is not for human exploitation (see animal rights). --Ed Poor 20:19, 22 May 2007 (EDT)

Good point. You may recall about three years ago Los Alamos had a terrible fire that swept accross the Labs and burnt down 400 homes. The cause of the fire was environmentalist opposing even the removal of dead wood from fallen trees to be commercially expoited as fire wood (commercial logging had long ago been banned). The forest was a tinder box ready to go up in flames. And of course when the Forestry Dept attempted a controlled burn to avoid disaster, they picked a day when the wind was blowing about 40 miles an hour. Classic study of government & environmentalist teaming together to prevent private, greedy, capitalist rape of the environment. RobS 22:29, 22 May 2007 (EDT)

One finger to point is at the environmentalists. Another is at flawed fire management policy for the past few decades. The Tahoe basin is an area that is subject to many natural fires. With so many houses in the area (where did the environmentalists stand on that?) it became necessary to put out every fire immediately. This prevented the natural cycle of fuel for fires from being reduced regularly. Fire management has acknowledged that this fire has been in the making for decades. Further reading: http://www.sfgate.com/cgi-bin/article.cgi?f=/c/a/2007/06/26/HISTORY.TMP Compare this to Yosemite (similar area) and the fire management policies there http://www.nps.gov/archive/yose/fire/wildland.htm http://www.yosemite.org/visitor/frequent-fire.htm . Additional useful reading is the U.S Fish & Wildlife Service on fire management - http://www.fws.gov/fire/living_with_fire/ . Overly dense crowding for the area, removal of fire resistant species of trees, and quick extinguishing of natural fires coupled with a much dryer than average winter. Environmentalists certainly are not to blame for the first three on that list, and can hardly be blamed for the fourth. --Mtur 01:07, 27 June 2007 (EDT)

Additional quotes from the article mentioned:

Reading on defensible space in the Tahoe area - http://www.meeksbayfire.com/dfns.htm

We need to distinguish among the various kinds of environmentalists. Some are conservationists. Other are "no-use" preservationists. Many (most?) are activists who are using environmental issues to advance social, political or economic agendas; this group is the hardest to describe, as they often don't want to be pinned down.

The general impression as that environmentalists "care about" the environment, but this is often ambiguous. Do they care about it for itself, or for what it can do for human beings, or what? And is their concern genuine or fraudulent?

For example, is agitation to ban or restrict DDT based on genuine concern for ecological damage - or on fear that using DDT to reduce malaria deaths will lead to overpopulation? If it's the latter, then we should be up front about this, even if they are not. --Ed Poor Talk 00:20, 6 July 2007 (EDT)

I think it is rather simple to define enviromentalism as liberal. Just because liberals tend to support environmentalism doesn't mean that that the pilosophy is liberal. I have never heard any evidence that relates environmentalism to true liberalism. This is coming from a conservative. —The preceding unsigned comment was added by Double Edge (talk)