From Conservapedia
(Redirected from Superdelegates)
Jump to: navigation, search 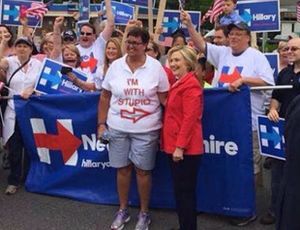 As corrupt as the Superdelegate system is, rules were expanded in the Clinton era allowing for lobbyists and donors to purchase voting seats at the Democratic National Convention.

A Superdelegate is a position of privilege bestowed upon certain voting delegates to the National Democratic Presidential Nominating Convention who are awarded their status outside the ordinary election process. Most are sitting members of congress, governors, big city mayors, party bosses, past elected officials, pollsters,[1] and registered lobbyists[2] who can purchase a seat.[3]

Approximately one fifth of the delegates to the Democratic national convention are Superdelegates, essentially holding veto power over the voters choice for a popular "insurgent candidate".[4] "Officially" there are 775 superdelegates; however, outside of MSM news reports there is no independent tally of the exact number.

The Superdelegate plan was designed to re-take control of the Democratic party from "extremists" and outsiders that the DNC previously commissioned George McGovern, through a series of reforms, to recruit into the party apparatus.

The Republican Party does not use the superdelegate system in its Republican National Convention: although each state has three positions (chair, national committeeman, and national committeewoman) who automatically are delegates by virtue of their positions, they do not hold veto power but their votes are equal to the state's other delegates.

The Superdelegate system was an effort to dis-empower voters after the rapid expansion of primary elections and voting rights throughout the United States which the party's McGovern-Fraser Commission fostered in the 1970s .

After Ted Kennedy's primary challenge and President Carter's loss to Reagan in 1980, Democrats rewrote their nominating and convention procedures for the fourth time in twelve years.[5] Anticipating a two-way contest in 1984 between Sen. Kennedy and former Vice President Walter Mondale,[6] the original point of contention between them was over bound delegates which Sen. Kennedy wanted to loosen, while the Mondale machine wanted a candidate to be able to go so far as to replace a "disloyal delegate".[7]

The Mondale machine, supported by Chairman Jim Hunt and union bosses, more importantly wanted to do something about outsiders and New Left “extremists”[8] they felt had taken over the party.[9][10][11] The Mondale and Kennedy machines agreed to do away with portions of the McGovern-Fraser Commission (known as the "reform movement") that had stripped influence and power from elected government office holders in the nomination process[12] and paved the way for outsiders and an "insurgent candidate" . The rules the Democratic National Committee (DNC) adopted from Hunt Commission recommendations didn't just allow or encourage incumbents to return, it guaranteed them seats outside the regular democratic selection process. The Kennedy faction wanted to cut the number from about 800 reserved seats in half,[13] but over the years the base number of other delegates was expanded to meet the target of about 1-in-6 rather than the 1-in-3 originally proposed. Susan Estrich, who was to manage Michael Dukakis' 1988 presidential campaign[14] strenuously objected to the plan, and derisively coined the term "super-delegate", whom she claimed would disproportionately be white males.[15] Nevertheless, the idea became rule, and the figure of about 800 positions has held,[16] while the requirements for non-elected office holders chosen outside of the primary and caucus system has only been expanded.[17] The "Old Democrats" had retaken power with a vengeance.

The Hunt Commission (or "counter-reform movement") discarded the proportional allocation rules from the 1970s in favor of winner-take-all. Prior to proportional representation there was the “unit rule”, a delegation had to vote as a unit, now known as “winner-take-all”. McGovern-Fraser scraped the unit rule in favor of affirmative action, or “proportional representation”, rather than actual votes cast. Today's “unpledged” Superdelegates are party bosses whose cronies, the “pledged delegates”, earn their seats in state machines by working to elect Superdelegates in previous elections. Together they function as a unit, wherein the boss makes a deal to throw his weight behind a candidate—a re-creation of the 19th century political machine that Progressive reformers such as Bob La Follette fought to eliminate.[18]

The winner-take-all rules had the embarrassing affect in 1984 of allowing an insurgent candidate to rack up big delegate wins in late primary states.[19] So after 1984 the party brought back "proportional allocation".[20]

When Sen. Kennedy decided not to run in 1984, two insurgent candidates did appear, McGovern's 1972 "New Democrat" campaign manager Sen. Gary Hart, and Jesse Jackson, who was to be the first African-American to win states in a major party primary election for president. Susan Estrich's words were prophetic: the good old white boy network, including Hart, shot him down.[21] The rules were written for a two-way contest between establishment insiders—Mondale and Kennedy, not the three-way slugfest between baby boomers, blacks, and the party Old Guard it came to be.

The original "insurgent candidate" the Hunt Commission referred indirectly to was George McGovern, whom after his massive Electoral loss in 1972 was seen as anti-patriotic for his longstanding opposition to President Lyndon Johnson's War which had the effect of dividing the party, and the country, and permanently tarnished Johnson and Vice President Hubert Humphrey's[22] civil rights records, painting these two liberals for posterity as "war hawks".

George Wallace was considered a particularly unwelcome insurgent, considering he had won more states and Electors in 1968 than the party's own nominee in 1972. Wallace had sown disruption and division within the party in the 1964, 1972, and 1976 election cycles which had conflicted with the party's outreach aims culminating in the Voting Rights Act of 1965 and the affirmative action quotas of the McGovern-Fraser and Mikulski Commissions. Many Southern Democrats by this time already viewed themselves as persona non grata and moved to the Republicans, such as Texas Governor and presidential aspirant John Connally, and others.

Another “insurgent” was Mondale's old boss, Jimmy Carter, who was first to recognize the new system of manipulating free television air time (and not Ronald Reagan as some believe) with early primary and caucus wins to pile up rapid delegate leads and soak up donor contributions to gain momentum. Carter had scarce contacts with old party bosses and soon buried competitors working under the old system.

It further should be noted, Lyndon LaRouche was considered by some as a viable candidate in 1980 & '84. While his ability to fundraise was impressive if not frightening to some, he never garnered more than 2% in any primary, won no delegates, nor had his name placed in nomination. LaRouche however would also fit the generic term "insurgent candidate" at that time, although his bluster never amounted to any real threat of hijacking the party.

While the McGovern-Fraser reform movement through affirmative action brought women, younger people and minorities into the active party apparatus, it disenfranchised public office holders in order to do so. The counter-reform Hunt Commission brought back party bosses and allowed New Left activist to stay, provided they swore-off involvement with anti-establishment extremists and settled into their positions of privilege. Many still used liberal and progressive rhetoric to sell the party to the masses, but covertly pursued a corporatist agenda of competing with Republicans for the big money donations.[23][24]

In 1984 longtime party mechanic Walter Mondale entered the convention 40 delegates shy but secured the nomination with Superdelegates, a contingent of unelected party insiders he helped write into the rules two years earlier. Superdelegates include sitting and former elected officials who can bypass regular rules governing delegate selection to avoid a grassroots backlash and still enjoy a position of power, prestige, and privilege.[25]

Sen. Gary Hart won 26 states and 1164 delegates at the convention.[26] Walter Mondale won 17 states and is said to have amassed about 1600 delegates. Jesse Jackson, the first African-American to win states in a major party primary, questioned the disparity between his vote total and delegate count, but even the New Left turned New Democrat, Gary Hart, echoed the DNC in poo-poo'ing Jackson's complaint.[27]

By convention time Hart was beating President Reagan by 10 points in national polls, but Mondale won nomination by capturing virtually all the Superdelegates. Even at this late date more than 30 years later it is hard to ascertain just exactly how many Superdelegate votes there were at this crooked convention. As of April 2016 Wikipedia's 1984 Democratic Primaries page does not even mention the term "Superdelegate" anywhere. Multiple original sources put the figure between 550 and 800; The Nation magazine says "roughly 700";[28] Salon says 550.[29] Wikipedia is silent on the matter. Whatever the result, it is patently clear the Democratic establishment was not going to let anyone other than Walter Mondale win the nomination after Sen. Kennedy forfeited.[30]

One state, Wisconsin is recorded as having voted twice according to the official surviving record in primaries and caucuses. The official record shows Hart winning a plurality, 44% to Mondale's 41%; four days later in a highly unusual move, the "Wisconsin caucus" delivered a 54% to 29% majority (see Wikipedia: results by state) to Mondale in a winner-take-all closed caucus. Prior to the convention Wisconsin Democrats sued over the national party's effort to enforce the undemocratic rules formulated by the Winograd Commission targeting an 80 year old body of law standing behind Wisconsin's primary system. The McGovern-Fraser Commission had used Wisconsin's experience and model to expand primaries into dozens of other states. The DNC lost the suit, but appealed to the U.S. Supreme Court and won a reversal. Wisconsin Democrats were forced to abandon the direct primary election and adopt a closed caucus method of delegate selection. Because the state legislature had not acted yet, "voters" became "participants" and only allowed to express a non-binding "presidential preference”[31] rather than a legal "vote" with the sanction of law.[32] Under the DNC's 14th Amendment associational rights, legal voters in Wisconsin and elsewhere were disenfranchised. The reforms of Fighting Bob La Follette, founder of the Progressive movement, were completely undone.[33]

Under the original rules, Superdelegates were not supposed to "commit" to a candidate until the convention.[34] Hart says he and his wife personally spoke with all of them to ask for their support, but virtually all were committed to Mondale for 2 years already.[35]

After the Mondale-Hart debacle, another player who ran McGovern's Texas campaign, Bill Clinton, helped organize the Democratic Leadership Council (DLC). By 1992 the DLC had taken over the Democratic National Committee, but it failed to reform Mondale's rules of special privileges for party insiders. The DLC, made up originally of New Leftists, as "New Democrats" followed the view of old guard Democrats that the party had been hijacked by extremists, and the new Superdelegate structure could be used by a new generation of insiders to keep control. But the New Democrats went a step further: they sold out their leftist idealism for corporate greed.

Even though Hillary Clinton won the popular vote at the ballot box,[36] Barack Obama gave more money to the Superdelegates.[37]

In Bernie Sanders' 25 years in Washington caucusing with the Democrats, he never once served as a Superdelegate—not until he registered as a Democrat to seek the party's presidential nomination a few months earlier. Although he had voted for party leaders and was awarded preferential committee assignments, his absence as a Superdelegate earned him very little, if anything, from his Congressional colleagues for decades of loyalty on votes and bills. Their support overwhelmingly went to a one-term Senator, multi-millionaire, and effective fundraiser who swamped the delegates with cash donations for their own campaigns[38][39]