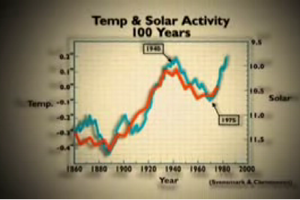 There is additional evidence of the sun's effect upon the climate over several millennia. Every two centuries or so, the sun's magnetism drops to very low levels for several decades. One instance is the low level of the sun's magnetism during the seventeenth century (ca. 1640 to 1720, the "Maunder Minimum"). A fainter sun at that time could have contributed to a climatic period called the "Little Ice Age," when the average global temperature was about 1 °C cooler than it is today. [1]

Changes of the Sun's light and particles interact in many different ways with the Earth's environment that extends outward to the near space surrounding Earth. The latest surprising developments in the study of the Sun-climate connection suggest that the Sun notably influences the temperature of the Earth, through both changes in the Sun's light and its wind of charged-particles. [2]