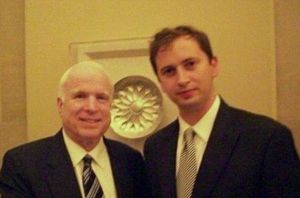 Sergei Millian is a Belarus-born American.[1]

Millian is believed to be Source D (& possibly Source E) in a collection of memos Christopher Steele wrote between June and December 2016. Information from Millian appears to have come second or third-hand George Papadopoulos’ wife, Simona Mangiante, said “Millian approached the young Trump foreign policy advisor early in 2016, after he became associated with the campaign, and they struck up a friendship”. This description does not appear to be entirely accurate. On July 22, 2016, Papadopoulos emailed Ivan Timofeev regarding Millian, “if you know any background of him that is noteworthy before I see him, kindly send my way.” Papadopoulos met Millian somewhere between July 23-25, 2016. It appears this was their first meeting. Millian would give an interview to ABC’s Brian Ross in July 2016 (day not disclosed), claiming to have ties to then-Candidate Trump.[2]