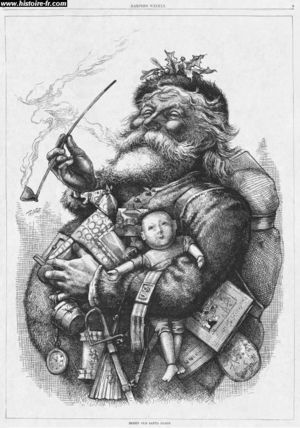 This article is about the Christmas gift-giver. For the saint, see Saint Nicholas.

Santa Claus (from Dutch: Sinterklaas), figure of modern folklore, represented as a bearded, friendly old man who delivers presents to children on Christmas Eve. A popular cultural icon since the late 18th century[1], Santa Claus had its origins within northern and western Europe, and was likely based upon legends and myths associated with St. Nicholas of Myra.

The ultimate basis of Santa Claus is Saint Nicholas (270-343 AD), the Roman Catholic Bishop of Myra. Of the many legends attributed to him one of the most persistent is a gift of gold given to a deranged man, that his daughters may not prostitute themselves:

"And when his father and mother were departed out of this life, he began to think how he might distribute his riches, and not to the praising of the world but to the honour and glory of God. And it was so that one, his neighbour, had then three daughters, virgins, and he was a nobleman: but for the poverty of them together, they were constrained, and in very purpose to abandon them to the sin of lechery, so that by the gain and winning of their infamy they might be sustained. And when the holy man Nicholas knew hereof he had great horror of this villainy, and threw by night secretly into the house of the man a mass of gold wrapped in a cloth. And when the man arose in the morning, he found this mass of gold, and rendered to God therefor great thankings, and therewith he married his oldest daughter."[2]

In the ninth century AD, coincident with the Muslim invasion and re-invention of Roman Asia Minor as the Ottoman Empire, the bones of Saint Nicholas were transported to Europe. The many legends about this bishop—including a persistent legend about the "manna" coming from his body after his death—fostered the growth of new legends of Saint Nicholas being somehow larger than life.

The figure of St. Nicholas the Bishop was secularized in the middle of the 19th century and lost its regalia (religious vestments, staff, miter, etc.), with the garments of northern climates taking the place of the liturgical garb. One of the first descriptions that resembles today's form of Santa Claus comes from a poem by New Yorker William Gilley. In 1821 he described Santeclaus as completely dressed in fur and riding on a sleigh pulled by reindeer.[3]

A year later another depiction was written into the poem "Twas the night before Christmas, or A Visit from St. Nicholas" by Clement Clarke Moore from New York, which had a much greater influence. His description of St. Nicholas as a jolly, harmless elf was far removed from his former role as a bishop:

He was dressed all in fur, from his head to his foot,
And his clothes were all tarnished with ashes and soot;
A bundle of toys he had flung on his back,
And he looked like a peddler just opening his pack.
His eyes—how they twinkled! his dimples, how merry!
His cheeks were like roses, his nose like a cherry!
His droll little mouth was drawn up like a bow,
And the beard on his chin was as white as the snow;
The stump of a pipe he held tight in his teeth,
And the smoke, it encircled his head like a wreath;
He had a broad face and a little round belly
That shook when he laughed, like a bowl full of jelly.[4]

The German-American Thomas Nast, who emigrated to New York in 1846 and became known as a cartoonist in the United States, drew an old, bearded man for Harper's Weekly magazine during the American Civil War during Christmas in 1863. Nast's idea of ​​Santa Claus dates back to the German regional Palatinate "Belzenickel", a fur-wearing Santa Claus figure from the 19th century which he knew from childhood, but was hardly pro-child; this particular figure would arrive in the weeks before Christmas carrying a bundle of wooden rods, and upon learning which were naughty instead of nice, he would use the rods to spank them. His version of Santa Claus was first bedecked in starry top and striped pants, more in keeping with Uncle Sam's appearance during the war (he supported the Union effort); it would later evolve over the course of thirty years into the familiar the outfit of red fur trimmed in white, with Nast drawing the face after himself.[5]