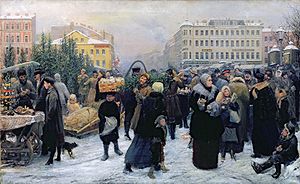 Russian painting has a long and glorious development. In the Middle ages began the tradition of icon painting imported from the Byzantine Empire; it lasted until the Modern age. A masterpiece of Russian iconography is the Virgin of Vladimir (12th century), conserved in Moscow since 1395 (it is not a Russian icon, but a gift brought from Constantinople to Russia); it is one of the most venerated Orthodox icons and a typical example of Byzantine iconography. Important developments in the Moscow school can be seen through the works of four masters of icon painting: Theophanes the Greek, Andrei Rublev, Dionisii (Dionysius), and Simon Ushakov. [1]

Andrei Rublev (1360s - 1427 or 1430), a medieval painter, is best known for his masterpiece the icon "The Old Testament Trinity". Religious painting predominated in Russia until the eighteenth century. Russian art in general, with the accession of Peter the Great, presented a major modernization with a significant external influence. Catherine the Great (reigned 1762 - 1796), who was a Francophile art lover and avid collector, encouraged painting, and created the Hermitage Museum. Alexei Antropov (1716 - 1795) was one of the first Russian portraitists. Also important were Dmitri Levitski (1735-1822) and Vladímir Borovikovski (1757-1825); both demonstrated originality in relation to foreign models. Fyodor Alekseev (ca. 1753 – 1824) was an early landscape painter. The great Russian painter Ivan Aivazovsky (1817 - 1900) is famous for his seascapes. He left more than 6,000 pictures, and became the most prolific Russian painter of his time. Aivazovsky painted also landscapes and portraits. Ivan Kramskoy (1837 – 1887), painter and draughtsman, was an outstanding representative of the democratic culture in Russia of the second half of the 19th century.[2]

Alexei Savrasov (1830-1897), a landscape painter, was the creator of the Russian lyrical landscape style; The Rooks Have Come Back (1871) gave him fame. Ivan Shishkin (1832–1898) became famous for his forest landscapes; he headed the landscape painting class at the Highest Art School in St. Petersburg. The works of this outstanding artist enjoy vast popularity in Russia; the best of them have become the classics of Russian landscape painting.[3]

Ilya Repin (1844-1930) was a Russian Realistic painter and sculptor. He was an influential member of the group the Wanderers. Repin occupies a position alongside Dostoevsky, Tolstoy, and Rimsky-Korsakov, and is considered Russia's foremost national artist.

Vasily Surikov (1848 - 1916) was a Siberian painter of large-scale historical subjects and portraits. Also noteworthy were Fyodor Vasilyev (1850-1873), one of the best realistic Russians painters, who made ​​numerous landscapes, and Isaac Levitan (1860-1900), who was the foremost landscape painter of his time. Ivan Aivazovsky, Towers on the Rock Near Bosporus, 1859.

In the early twentieth century, Russian culture was in a state of feverish excitement. Modern styles were adopted as Symbolism, Impressionism, Cubism, Expressionism and Futurism. Wassily Kandinsky (1866 - 1944) is considered one of the fathers of abstract art.

"Kandinsky realized the tremendous power that art could exert over the spectator and that painting could develop powers equivalent to those of music. He felt special attraction to Wagner, whose music was greatly admired by the Symbolists.[4] Sundown over a Marsh by Alexei Savrasov, 1871.