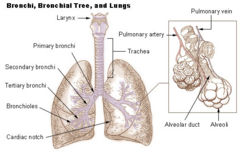 The human respiratory system is responsible for the exchange of carbon dioxide (CO2,) and oxygen (O2). Oxygen is essential in the production of adenosine triphosphate (ATP)—the nucleotide responsible for cell metabolism the "fuel" of the cell— by the mitochondria. Human beings cannot live without a properly functioning respiratory system unless some sort of mechanical intervention (e.g. ventilator, heart-lung bypass) is implemented.

This part of the respiratory tract consists the of the bronchi, bronchioles, and alveoli. All of these structures are contained within the lungs. The alveoli are responsible for the gas exchange mentioned above.

This section contains information on the mechanism of respiration and gas exchange. For further information on systemic oxygenation, see pulmonary circulation.[1]

Breathing is an active process controlled by the hypothalamus.[2] In humans, the diaphragm is the primary muscle of respiration. At rest, the diaphragm is a dome that projects into the chest. When it contracts, it flattens, and the volume of the chest cavity increases. This change in volume causes the pressure in the chest cavity to drop, and air moves into the lungs due to this pressure difference. Contraction and relaxation of the intercostal muscles, which stretch between the ribs, play a smaller role in respiration. The intercostal muscles can increase or decrease the volume of the chest depending on which specific muscles contract.