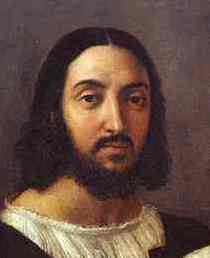 Raffaello Santi (or Sanzio) (1483-1520), known as Raphael, was born in Urbino, Italy. He mastered the use of color and painted beautiful frescoes in churches and for private patrons, the most famous of which may be The School of Athens (1509), an interesting painting depicting Plato and Aristotle surrounded by their pupils.

Raffaelo Sanzio was the youngest of the three giants of the High Renaissance... One of the most frequently discussed and best-loved paintings of the Renaissance is Raphael's so-called Sistine Madonna. For many people it remains the supreme example of western painting, and its popularity is virtually as great as that of the Mona Lisa. [1]

He was inspired by two of the greatest artists in the history of the world: Michelangelo and Leonardo da Vinci. Both of whom were in Florence during the time that Raphael was working in the studio of Perugino. Soon he began to adopt Michelangelo's vigorous energy and Leonardo's sfumato and spiritualism. Raphael lived an active life. The numerous architectural and painting commissions he received caused him to overwork. He died at the age of thirty-seven.[2] Five hundred years ago Raphael, the great master painter of the Renaissance, was commissioned by Pope Julius II to paint the Sistine Madonna. Today, it is one of the most famous works of art in the world. It belongs to the Gemäldegalerie Alte Meister in Dresden. [1]