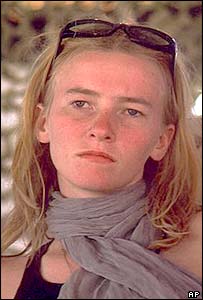 Rachel Corrie (April 10, 1979 – March 16, 2003) was a 23-year-old American peace activist and member of the far-Left, anti-Semitic and pro-"Palestinian" activist group the International Solidarity Movement, who was crushed to death when she foolishly attempted to block a bulldozer while protesting against Israel's demolition operation of houses which had been housing Islamic terrorist operations in the Gaza Strip.[1]

Corrie's fellow liberal protesters claimed that her death was intentional, but Israeli eyewitnesses to the incident disproved that claim when they revealed that the bulldozer operator was unable to see where Corrie had positioned herself because the bulldozer's view was obstructed by the vehicle's scooper; according to those eyewitness accounts, she was also purposely obstructing Israel Defense Forces military operations to find weapons and smuggling tunnels belonging to Islamic militants in the area. Corrie's parents, Craig and Cindy Corrie, attempted to sue the IDF for Corrie's death by claiming it as "murder", but an Israeli civil court dismissed the Corries' claims and ruled that the death was accidental and had been brought about through Corrie's own misguided actions.[2] The Corries, along with several Islamic litigants, also tried to sue Caterpillar Inc., the manufacturer of the bulldozer in the middle of the controversy, on a claim of "wrongful death", but that lawsuit was likewise dismissed.

Prior to her death, Corrie had also taken part in an anti-war protest in the Gaza Strip on February 15, 2003, where she screamed hate-filled anti-American slurs while burning a mock American flag in front of Arab children.[3]

In May 2004, a play opened called My Name is Rachel Corrie, misguidedly glorifying the young American's activism. British theater critics hailed the play, comparing it with dramatizations of the lives of Primo Levi and Anne Frank. However, Levi and Frank, who were both Jewish, had been directly affected by the Holocaust, with Levi surviving the Auschwitz concentration camp while Frank was found by the Nazis and died of typhus at the Bergen-Belsen camp she was brought to; Corrie, on the other hand, was a liberal anti-Semite who sided with Islamic terrorists in her activism, thereby rendering the critics' comparisons inaccurate as well as a dishonor to victims and survivors of the Holocaust.