Pope Saint John Paul II (May 18, 1920 - April 2, 2005; r. October 16, 1978 to April 2, 2005), born Karol Józef Wojtyła in Wadowice, Poland, was the 264th pope of the Catholic Church. He succeeded John Paul I and preceded Benedict XVI. He held the second-longest papacy in modern times, after Pope Pius IX, and was the first non-Italian pope in over 400 years (since 1523). He became Vicar of Christ (one of the titles of the pope) in 1978, the Year of Three Popes, and is now known as Saint John Paul the Great after being canonized on April 27, 2014. He was fluent in ten languages and would often give his homilies in the local language of countries he visited. By using Godly Love, he stood up to the Nazis and the Communists and overcame them both. His pontificate was successful in keeping a vibrant modern Church in strict accordance with Apostolic traditions. He canonized more saints than any other pope.

Karol was born the last of three siblings to father Karol Wojtyła and mother Emilia Kaczorowska. His older sister, Olga, died before he was born. At a young age, he was known to be gentle and loving to all. His mother died on April 13, 1929 and his older brother, who was a doctor, died of scarlet fever on December 5, 1932.[1] He lived with his father until he entered the Jagiellonian University in Kraków, Poland in 1938. He was a very good football (soccer) player and his nickname was 'Goalie'. Karol loved the arts and was involved in poetry and drama. In 1939, Nazi Germany invaded western Poland, starting World War II, with the Soviet invasion also that year from the east. The following year, 1940, Karol started working in a quarry and chemical plant to avoid deportation to Germany as slave labor. His father died on February 18, 1941, over three months before Karol turned 21 years old.[2] Occupied Poland was a hard life for Karol but he survived by hiding within the underground movement. He refused any armed struggle, and was intent on keeping his freedoms and the Polish people's dignity alive through arts. He was known to help Jewish Poles against the wrath of Nazi persecution. In October 1942, at the age of 22, he entered the underground seminary to study as a priest. In 1945, the Nazis evacuated Poland and Communism through the USSR eventually took over. In 1946, Karol Wojtyla became a priest, then sent to Rome for graduate studies and in 1948, his first pastoral assignment in Niegowic. In 1949, he was transferred to be a chaplain at St. Florian's Church in Krakow and a student counselor at Jagiellonian University, a professor of social ethics at the university in 1956, auxiliary bishop of Krakow in 1958 and ended the decade by celebrating the first ever Mass outdoors on Christmas Eve, 1959 in then-newly built and then-churchless Nowa Huta. In the 1960s, he was at the Vatican during Vatican II, became Krakow's archbishop in 1964 and in 1967, he became a Cardinal. In 1977, after almost 20 years of campaigning for and construction of a church in Nowa Huta, one was completed, the Lord's Ark, which Wojtyla consecrated that May.[3]

The Conclave of Cardinals elected him pope on October 16, 1978. As pope, John Paul II traveled to more countries, and traveled more miles than any other previous pope. He also conducted more public meetings with the faithful, as the total attendance of his Wednesday audiences alone eclipsed 17,600,000 people. Controversially, during his reign, as many new saints were canonized as had been canonized in the reigns of all previous popes combined.

On October 22, 1996 Pope John Paul II made world headlines with his message1 delivered to the Pontifical Academy of Sciences, entitled Magisterium Is Concerned with Question of Evolution for It Involves Conception of Man and resulted in headlines in many of the world's newspapers declaring that evolution and creation could coexist. His holiness stated his opinion on evolution that "In fact it is remarkable that this theory has had progressively greater influence on the spirit of researchers, following a series of discoveries in different scholarly disciplines. The convergence in the results of these independent studies—which was neither planned nor sought—constitutes in itself a significant argument in favor of the theory."

Another one of his accomplishments is the establishment of World Youth Day. Also, he wrote 14 encyclicals, 5 books, and innumerable letters.

An Islamic assassin from Turkey, Mehmet Ali Agca, shot Pope John Paul II on May 13, 1981 at St. Peter's Square. In critical condition, he was rushed to Gemelli Hospital with abdominal wounds and severe blood loss. The recovered pope would meet with Mehmet in prison to offer forgiveness. Years later, an Italian court ruled that the Soviets were involved in the plot, possibly done for his efforts in Poland's Solidarity movement. CIA reports have Warsaw Pact nation Communist Bulgaria as a culprit.[4]

On May 13, 1982, an ultra-conservative Spanish monk named Juan Maria Fernandez y Krohn attacked Pope John Paul II with a bayonet in Fatima, Portugal. At the time, the pope concealed the fact from the public that Fernandez y Krohn had wounded him with the blade. The monk was sentenced to 6-1/2 years in prison for the attack.[5][6]

Due to these attacks, the "Popemobile", a bullet-proof car, was used for Pope John Paul's visit to Great Britain on May 28 through June 2, 1982.[7]

Speaking of Crossing The Threshold of Hope. God is always on the side of the suffering. His omnipotence is manifested precisely in the fact that he freely accepted suffering. He could have chosen not to do so. He could have chosen to demonstrate his omnipotence even at the moment of the Crucifixion. In fact, it was proposed to him: "Let the Messiah, the King of Israel come down now from the cross that we may see and believe." (Mark 15.32) But he did not accept that challenge. The fact that he stayed on the Cross until the end, the fact that on the Cross he could say, as do all who suffer, "My God, my God, why have you forsaken me?" (Mark 15.34) If the agony on the Cross had not happened, the truth that God is Love would have been unfounded. Yes! God is Love and precisely for this he gave his Son, to reveal himself completely as Love. Christ is the One who "loved...to the end." (John 13.1) "To the end" means to the last breath.

"Science can purify religion from error and superstition; religion can purify science from idolatry and false absolutes. Each can draw the other into a wider world, a world in which both can flourish.... We need each other to be what we must be, what we are called to be."[8] 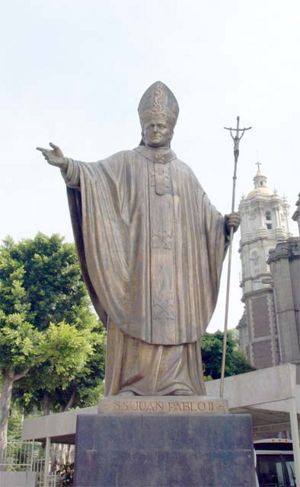 Statue of Pope John-Paul II, at the basilica of Our Lady of Guadalupe