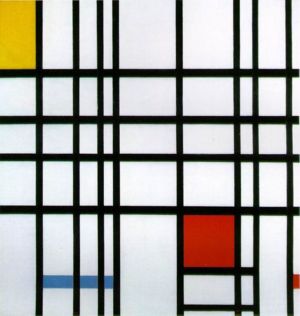 Composition with Yellow, Blue, and Red

Pieter Cornelis (Piet) Mondrian (b. Amersfoort, Netherlands, 1872 — d. New York City, 1944) Dutch painter. He was an artist of the DeStijl movement. His work is characterized by severe geometry and a very limited color scheme. One of Mondrian's better known works is "Composition with Yellow, Blue, and Red".[1]

In the early twentieth century, many artistic movements began to thrive in European intellectual circles. Although these societies were varied in many philosophical ways, all of them were based on the belief of the life-altering influence of art and a general disgust for conventional artistic forms. One of the main champions of this creative outlet was a Dutch artist by the name of Piet Mondrian. By the time of his death in 1944, Piet Mondrian would leave a lasting and radical impression on contemporary art in the form of the creation of a new style of art known as neoplasticism. [2]