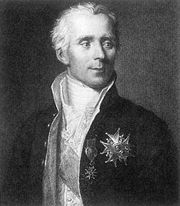 Pierre Simon Laplace (b. Beaumont-en-Auge, March 23, 1749 - d. Paris, March 5, 1827) was a French astronomer and mathematician. Laplace is considered one of the greatest scientists of all time. His works are contained in his five volume "Celestial Mechanics" (1799-1825). French scientists, especially Laplace developed and systematized Isaac Newton's ideas into modern Classical mechanics in the late 18th century.

Laplace proved the stability of the solar system. In analysis Laplace introduced the potential function and Laplace coefficients. He also put the theory of mathematical probability on a sound footing.[1]

Laplace and Herschel developed the nebular hypothesis of the creation of the universe, which held that the planets were formed by a combination of gravitational, rotational, and thermal effects. He was the first to develop the idea of an infinite and mechanistic causal chain issuing in predictability.

Laplace was born on March 23, 1749 into a farming family in the Normandy, France. He visited the Benedictine priory school and studied theology at the University of Caen. But Laplace left Caen to focus on mathematics and lived in Paris. In 1788 he married his 18-year old wife Marie Charlotte de Courty de Romanges.[2]

The great French chemist Antoine Lavoisier collaborated with Laplace during 1777-84 on experiments on the physics of heat, temperature, and combustion. The collaboration was beneficial to the chemist Lavoisier because it increased his understanding of the physical aspects of chemical problems. Laplace's assistance enabled Lavoisier to complete his case for the rejection of phlogiston theory. Laplace, a mathematician and physicist who had earlier demonstrated tremendous breadth of scientific understanding, benefited from close association with the already well-known Lavoisier by achieving earlier recognition than would otherwise have been the case.[3]