Petroleum, named for "rock oil," is a fossil fuel usually found deep within the earth, although some deposits are very close to the surface.

It is a heavy dark liquid, consisting of many different hydrocarbon compounds. Wells are drilled deep in to the ground, and the crude oil is extracted and fractionated into its components by volatility in an oil refinery. Recent advances in drilling technology have enabled deeper and more difficult wells to be successfully drilled, allowing previously inaccessible reserves to be tapped.

As of June 6, 2017, crude oil was trading at about $48 a barrel, which is a relatively low inflation-adjusted price for the last decade. Twenty years ago, in late 1998, crude oil briefly fell to prices much cheaper than its market price today.

Some of the main products distilled from crude oil are shown in the table below. The table[1] compares the qualities of various types of petroleum:

Oil deposits are often found in concurrence with natural gas in a variety of geological structural or stratigraphic traps.

Petroleum is possibly of organic origin, believed by some scientists to be formed from the remains of vegetable material. Secular geologists have contended that petroleum is the remains of huge amounts of algal material that was laid down millions of years ago, and altered in form under high temperatures and pressures. Layers of buried plant material tend to produce coal or lignite.

Creationary geologists believe that petroleum was formed from organic material buried during the Noachian flood.

Recently, researchers have shown that natural gas can form rapidly,[2] and that some is still being formed. This gives support to the creationary view. If this research is supported it would refute the idea that fossil fuels are diminishing.[Citation Needed] It has also been posulated that oil and natural gas are formed continuously by an abiotic process, deep inside the earth.[3] These petroleum products constantly migrate from deep in the earth to the earth's crust where they can be effectively mined.[4] If this hypothesis is supported by further evidence, the notion of petroleum as a limited resource would be refuted.

The idea of abiogenic petroleum generation is, however, not supported by science and applications of this theory have yet to yield petroleum in any significant quantities.

Crude Oil and Total Petroleum Imports to the U.S. 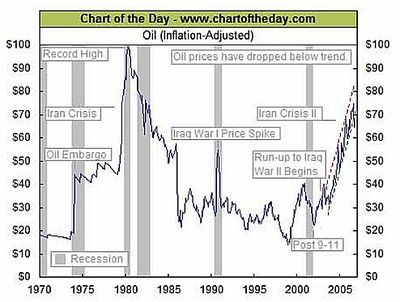 world price of one barrel of oil in constant 2009 dollars