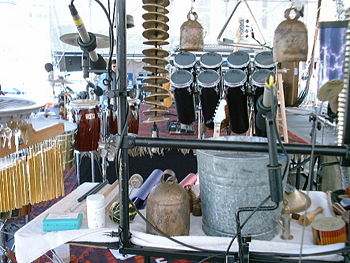 A varied array of percussion instruments, including bells, cymbals of different sizes, various kinds of drum, a triangle, octobans, and even improvised items such as a pail. (Pic: Ottmar Liebert)

Percussion is one of the main categories of musical instrument, which includes all instruments that produce a sound when struck or shaken. This encompasses a wide variety of drums, as well as ethnic percussion items such as cajons, accessory items like cymbals, and the standard array of keyboard instruments, including xylophones, glockenspiels and technically, the piano, since the sound is produced by a hammer striking a string.

The instruments of the percussion family may be placed into one of four categories:[1]

The fundamental sound-producing gesture in percussion music is the single stroke. This consists simply of striking a sound-producing object once with something capable of setting the object into vibration.[2] Other common rhymthic patterns are called rudiments, and make up the basics of concert and military style drumming. Some basic rudiments include:

Percussion instruments are used in most forms of music, providing a rhythm for the other instruments to keep to, as well as dramatic sounds that can punctuate important passages of the music. In the modern orchestra, the percussion section often includes timpani and a range of smaller instruments such as triangles, bells and woodblocks.

Percussion is particularly important in types of music, such as most Latin American and African styles, that place a strong emphasis on rhythm; these genres often use an array of traditional percussive instruments such as bongos and guiros. In recent years, some genres of popular music have abandoned 'real' percussion altogether in favor of drum machines, but the sounds these produce still have their roots in traditional drums and cymbals for the most part.

Recently, the percussion keyboard instruments have gained popularity in band and orchestral settings. Marimbas and vibraphones act similarly to the piano. The percussionist can use four mallets to play chords as a piano player might, or provide additional volume to a melodic line by playing it on the keyboard along with the band.

Percussion instruments are one of the oldest types of music-making device. Cymbals are often mentioned in the Bible, e.g. in Psalm 150:5.