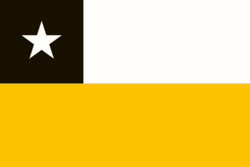 The flag of Anarcho-capitalist Chile is used by the channel as logo.

Paralelo 33 is a Chilean Libertarian YouTube Channel that is hosted by Rodrigo Prenafeta who comments on the news of Chile, South America and the World.

He is an Anarcho-capitalist and Paleolibertarian that opposed the United Nations interventionism, Gender Ideology and Radical Feminism.

The name of the channel resembles the latitude of Santiago de Chile.

Rodrigo is part of the Chilean Libertarian Party.