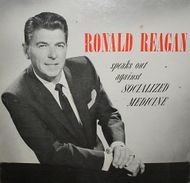 Operation Coffee Cup was a campaign during the 1950's and 1960's, with Ronald Reagan teamed up with the American Medical Association to warn citizens against the dangers of government run universal healthcare.

The campaign brought about an LP titled Ronald Reagan Speaks Out Against Socialized Medicine.[1]

Reagan's involvement with and publicity surrounding Operation Coffee Cup made it a more well known speech than his series entitled Encroaching Control. For this reason, any time Reagan talked about "spending our sunset years" describing the formerly free American nation, it is oftentimes mis-attributed.