No taxation without representation 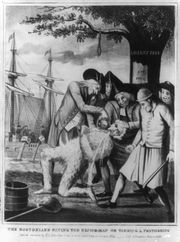 A depiction of a tarring and feathering in front of the Boston Liberty Tree.

"No taxation without representation" was a slogan in the period 1763-1775 that summarized one of 27 colonial grievances of the American colonists in the Thirteen colonies. The colonists complained that taxes were imposed by Parliament without the consent of the colonists, which violated the traditional Rights of Englishmen dating back centuries. The point was that the colonies had no representation in Parliament; the British responded that they were "virtually" represented. The Americans said these "virtual representatives" knew nothing about America.

The Americans strenuously rejected the Stamp Act of 1765 (which was repealed), and in 1773 the Sons of Liberty violently rejected the tax on tea imports at the Boston Tea Party. Britain retaliated against Boston in a chain of episodes that led to armed rebellion in 1775 and the American Revolution. The colonists formed militias and seized control of each colony, ousting the royal governors. The complaint was never officially over the amount of taxation (which was low), but always on the decision-making process by which taxes were decided in London, without representation for the colonists in British Parliament.

Prior to becoming detached from being a subject of the crown, the colonists were proud British citizens and proud of their rights. For centuries, Englishmen believed they were among the freest humans to have ever existed, backed by the guarantees of important documents such as the Magna Carta, the English Bill of Rights of 1689, and several others. However, by the 1760s the Americans came to believe they were being deprived of these historic rights.[2]

In the Virginia legislature Patrick Henry passed resolutions to the effect that Americans possessed all the rights of Englishmen; that the principle of no taxation without representation was an essential part of the English Constitution; and that Virginia alone enjoyed the right to tax Virginians.[3]

Many British leaders agreed with the Americans, but King George III (reigned 1760-1820) and his government took a hard-line position. The British could not accept Virginia's position because it would undermine the authority of Parliament, which it insisted in the Declaratory Act was always the final decision-making body. In Britain representation was highly limited; only 3% of the men could vote and they were controlled by local gentry.[5] Therefore, the British government argued that the colonists had virtual representation in their interests. In English history "no taxation without representation" was an old principle and meant that Parliament had to pass all taxes. At first the "representation" was held to be one of land, but by 1700 this had shifted to the notion that in Parliament all British subjects had a "virtual representation." "We virtually and implicitly allow the institutions of any government of which we enjoy the benefit and solicit the protection," declared Samuel Johnson in his political pamphlet Taxation No Tyranny. He rejected the plea that the colonists, who had no vote, were unrepresented. "They are represented," he said, "by the same virtual representation as the greater part of England."[6]

The theory of virtual representation was attacked in Britain by Charles Pratt, the Earl of Camden, and especially by William Pitt. It was wholly rejected in the colonies, who said the "virtual" was a cover for political corruption and was irreconcilable with their republican belief that government derives its just powers from the consent of the governed. Colonists said no man was represented if he were not allowed to vote. Moreover, even "If every inhabitant of America had the requisite freehold," said Daniel Dulany, "not one could vote, but upon the supposition of his ceasing to become an inhabitant of America, and becoming a resident of Great Britain." The colonists insisted that representation was achieved only through an assembly of men actually elected by the persons they were intended to represent.

In an appearance before Parliament in January, 1766, Prime Minister William Pitt stated:[7]

"The idea of a virtual representation of America in this House is the most contemptible that ever entered into the head of a man. It does not deserve a serious refutation. The Commons of America, represented in their several assemblies, have ever been in possession of the exercise of this their constitutional right, of giving and granting their own money. They would have been slaves if they had not enjoyed it."

Grenville responded to Pitt, saying the disturbances in America "border on open rebellion; and if the doctrine I have heard this day be confirmed, nothing can tend more directly to produce a revolution." External and internal taxes are the same, argued Grenville.[8]

The term has become common in popular usage to complain about exclusion from political participation, a distant and unresponsive government, or high taxes. It was used in the woman suffrage movement, for example, to decry the denial of the right to vote to females. Today, the Tea Party Movement uses the powerful slogan that underscores Washington D.C.'s continued lack of fiscal restraint and less than true representation of the people.

The phrase "taxation without representation" appears as a motto on District of Columbia license plates and is used as a rallying cry for the citizens of the District, as its citizens pay federal taxes yet have no voting member of the U.S. House or Senate. This despite the fact that the United States Constitution specifically insists in the Enclave Clause that the District is not a state and shall be held to different standards.