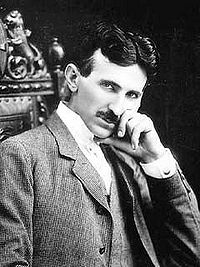 Nikola Tesla (July 9, 1856 – January 7, 1943) was a Serbian-American electrical engineer, inventor and physicist who contributed to many of the developments in the field of electricity. "It’s generally agreed that Tesla was an earlier inventor of radio than Guglielmo Marconi, who won the patent and a Nobel Prize."[1]

He pioneered the eventual adaptation of alternating current, which is more efficient than direct current.

The SI unit measuring magnetic flux density or magnetic induction (commonly known as the magnetic field), is named the tesla, in his honor (see induction motor).

He was Thomas Edison's main rival at the end of the 19th century, even surpassing him in fame in the 1890s.

Despite the international fame he received as a result of his work involving alternating current, he died relatively penniless in a New York hotel room.

Tesla criticized the Theory of Relativity.[2]

A Machine to End War

The liberal Wikipedia® quotes the 1937 interview "A Machine to End War" made by a German-American pro-Nazi propagandist George Sylvester Viereck where then 80 years old Tesla is supposedly promoting eugenics and other anti-Christian and radical views inherent to political agenda of Nazis.[5] This controversial allusions should be treated with extreme care as they are neither based on Tesla's own handwriting nor supported with audiorecords (cf. "by Nikola Tesla as told to George Sylvester Viereck"). The problems with 1:1 actual quotations of sources is one of the gnostic traits that Nazism was demonstrably marked with.[note 1]