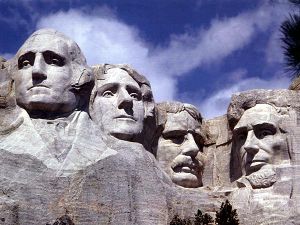 Mount Rushmore National Memorial is located in southwestern South Dakota, near the town of Keystone. It contains the sculptures of the faces of former U.S. Presidents George Washington, Thomas Jefferson, Theodore Roosevelt, and Abraham Lincoln. Managed by the National Park Service, a bureau of the United States Department of the Interior, this monument is visited by about two million people each year. The monument was designed by sculptor Gutzon Borglum.

Approved by President Calvin Coolidge, the carving on Mount Rushmore began in 1927 and was completed in 1941.

Carved into a granite mountain face in South Dakota’s southwesterly Black Hills, this sculpture of four of America’s most influential presidents (Washington, Jefferson, Lincoln, and Theodore Roosevelt) was considered an extraordinary feat of engineering when it was completed in 1941—and it’s still majestic today, bringing in more than two million visitors per year. [1]

The last part of Alfred Hitchcock's film North by Northwest takes place at Mount Rushmore, with a long and climactic fight taking place on the sculpture itself. But the National Park Service of the Department of the Interior revoked its permit for the movie to be filmed there due to opposition to portraying any violence at the monument, and so most of Hitchcock's filming was done back on the MGM's movie set.[1]

The nickname of the state South Dakota is 'Mount Rushmore State', after the famous landmark.