The Notre Dame cathedral in Paris

Outstanding architecture in the Middle Ages was seen primarily in the construction of majestic churches, and consisted of two main styles: Romanesque and Gothic. The San Miniato, in Florence (1013) is a beautiful example of Italian Romanesque architecture. From the Saint-Denis Cathedral in France to the Altneuschul Synagogue in Prague, Gothic architecture brought innovative new approaches to construction. [1] 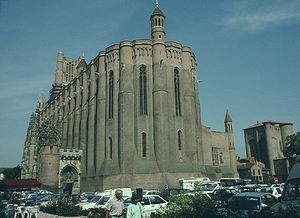 Romanesque architecture was a continuation of the Roman tradition of building, maintaining the rounded Roman arch; it was popular in Europe from about the 5th to the 13th centuries and is characterized by barrel vaulting, thick walls (massive walls), stout columns and relatively small windows. The term "Romanesque" was first used in the 19th century. Some examples of this period are: The Basilica of Paray-le-Monial, France, 1090-1110, and The Cathedral Albi, France. 1282-1390 and Worms Cathedral (ca. 1110) in Germany. The Abbey Church of St. Gall (Switzerland), founded about 720 AD was a notable example of this style but it was replaced by a Baroque Church; the plan of the Abbey was to become common throughout Germanic Europe.

An outstanding achievement of Romanesque architects was the development of stone vaulted buildings. This masonry vaulting replaced the highly flammable wooden roofs of pre-Romanesque structures. Vaults posed new structural problems for architects, who created a variety of solutions, including the dome, round and pointed vaults, and plain and ribbed groined vaulting . [2]

The term Romanesque is used at present for the more restricted period from the 10th to the 12th century.

The Rose Window of the Notre Dame

The Gothic style, developed later, consisted of taller, perpendicular structures, with long windows, pointed arches and “flying buttresses” (stone supports on the outer walls of churches). Gothic architecture, with its tall, pointed spires is said to reflect the desire of people of the Middle Ages to grow closer to God, reaching towards heaven and away from the earth. Tall windows allowed sunlight to illuminate the interior, unlike Romanesque architecture, in which windows were small and interiors were dim. A particularly stunning example of Gothic architecture is the Notre Dame in Paris, on which construction began in 1163 during the reign of Louis VII. The Notre Dame features a beautiful 'rose window'--another distinguishing characteristic of Gothic architecture.