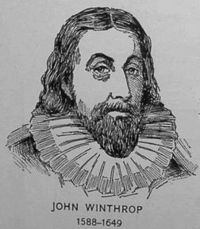 John Winthrop, first governor
The Massachusetts Bay Company was established by royal charter in 1629 as a joint stock company to promote trade and colonization along the Merrimack and Charles rivers in New England.

Its Puritan stockholders won the right to acquire all of the company's stocks and the company became self-governing and elected John Winthrop as its first governor in 1629. Puritan settlers began what would become the Great Puritan Migration. The first group arrived in Salem in 1630 and later established a settlement in Boston.

The company and the Massachusetts Bay Colony were one and the same but in 1684 the company lost its charter. Two years later the colony became part of the Dominion of New England.