Baron Manfred von Richthofen (2 May 1892 – 21 April 1918) was a German ace fighter pilot in World War I, and known in history as the "Red Baron"[1] due to the bright red colour scheme on a plane he used late in the war. He was the most successful flying ace during World War I, being officially credited with 80 confirmed air combat victories during his service with the Imperial German Army Air Service (Luftstreitkräfte).

Early Life and Outbreak of War

Richthofen was born into an aristocratic Prussian family in Kleinburg, Silesia. He had two brothers, one of which being Lothar von Richthofen, who would later join his brother's squadron, and one sister, His father, Phillip, was a cavalry Major in the German army. This was to form a basis for much of Richthofen's life. He joined a military cadet unit when he was 11, and completed his cadet training in 1911. Soon afterwards, his father got him accepted into a cavalry regiment.

Following the outbreak of World War One, he served as a cavalry recon officer on both the Western and Eastern fronts. However, upon the bogging down of fighting on the Western front into trench warfare, the cavalry became increasingly disused, and Richthofen was not satisfied with being used in a role that eventually became that of an infantry messenger. Leaving his cavalry regiment behind him, Richthofen applied, and was accepted into, the Imperial German Army Air Service (later Luftstreitkräfte).

Richthofen began as an observer in a recon plane over the Eastern front between June and August 1915 with No. 69 Flying Squadron, before his unit was transferred to the Western front. Between October 1915 and March 1916, he completed his training as a pilot, and joined a bomber squadron. During his time as an observer and bomber pilot, he claimed to have downed two French aircraft, although he was unable to produce enough evidence to be given official credit for the victories.

During another stint flying bombers over the Eastern front, he was approached by Oswald Boelcke, who was searching for promising pilots for the new fighter squadron, Jasta 2. After joining the unit, he won his first confirmed victory on September 17, 1916.

Manfred was taught how to be an effective fighter pilot by his squadron commander, Oswald Boelcke. At the time, Boelcke was the German Ace-of Aces (the highest scoring German ace), and the first to write down the basic tactics for being a good fighter pilot, many of which he pioneered, and most are still used today. These were known as the Dicta Boelcke. Boelcke was killed in a flying accident after colliding with a member of his own jasta on October 28, 1916, shortly after his 40th victory.

In January 1917, he was awarded the Pour le Mérite, the highest award for bravery that could be awarded to a member of the German army. Shortly afterwards, he was given command of Jasta 11, his now-famous "flying circus". Around this time, one of his pilots awoke one morning to see Manfred painting his plane red. When asked why, he responded with: "No reason in particular". This red colour scheme would eventually be shared by all the members of Jasta 11, with each plane having distinct personal markings for identification while airborne. Richthofen's however, was the only one to be painted almost purely red.

The most famous time period of his victories is April, 1917, called "bloody April" by the allied air services. During bloody April, Richthofen won 22 additional victories. On the 6th of July, he received a near-fatal head wound after being forced into an emergency landing by several British planes.

After a lengthy recovery period, Richthofen was never quite as efficient as a fighter once he returned to service.

Manfred von Richthofen was killed on April 21, 1918. At the time of his death, he was in pursuit of a rookie Canadian pilot, Wilfrid "Wop" May. Fellow Canadian, and May's squadron commander, saw the pursuit and went to attempt to save May from the attacking triplane.

At this point, there is much contest between historians as to who fired the fatal shot at Richthofen, with some claiming that he was shot down by Roy Brown, and others claiming that the shot was fired by Australian anti-aircraft gunner, Cedric Popkin, who was also shooting at Richthofen during the same engagement.

Regardless, his plane crashed near an Australian trench, where he was buried with full military honours by the nearby No.3 squadron Australian Flying Corps. His last word, as reported by the Australians from the trench line, was simply "kaputt" (broken).

Contrary to popular belief, he did not fly exclusively in his Fokker dr.1 triplane, although he did use that aircraft for 20 of his victories. Many of the others were gained using a wide variety of planes at his disposal, most notably the Albatros D.III.

James Thurber wrote a famous story entitled The Secret Life of Walter Mitty, in which a mild-mannered man has heroic daydreams while running shopping errands for his wife. In one of them, he imagines himself a World War I pilot in the RAF fighting Von Richthofen's Flying Circus.

In Charles M. Schulz's Peanuts cartoons, the beagle Snoopy, in a reference to Walter Mitty, is constantly daydreaming of being a World War I flying ace and fighting the Red Baron.

Then, in 1966, The Royal Guardsmen recorded a hit song entitled "Snoopy Vs. The Red Baron" which retells Schulz's story in song lyric form: 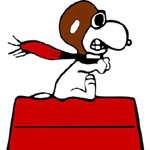 Now, Snoopy had sworn that he'd get that man
So he asked the Great Pumpkin for a new battle plan
He challenged the German to a real dogfight
While the Baron was laughing, he got him in his sight....