The Louvre Museum is the largest, and most famous art gallery and museum in the world. The Louvre was established in 1793 in Paris, France by French revolutionaries to show off the huge works of art that the French Kings had collected, and to show the people the opulence of the kings, as the Louvre was a massive palace.

A few of the more famous works of art displayed in the Louvre are Leonardo da Vinci's Mona Lisa, The Virgin and Child with St. Anne, Madonna of the Rocks, The Wedding at Cana, St. Francis of Assisi receives the stigmata, Delacroix's Liberty Leading the People, Winged Victory of Samothrace and the Venus de Milo. This is only a small fraction of the 35,000 works of art, sculpture, history, furniture and even the architecture of the museum itself. 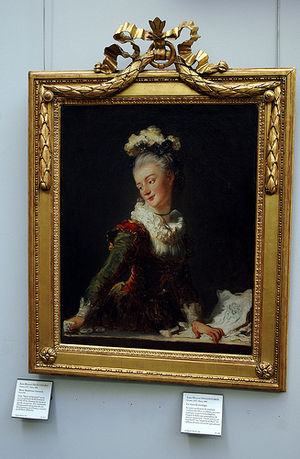 One of its famous paintings.
Portrait of Marie-Madeleine Guimard by Jean-Honoré Fragonard, near 1769.

The Louvre has been used in a number of different movies and television shows, as well as locations in books such as The Da Vinci Code.

Many citizens and art lovers were shocked by the proposal to build modern glass pyramids in front of the Louvre, but in the years since their construction, people have grown to love their clearly pointed contrast to the old ways.

Jacques-Louis David at the Louvre.