Lazarus and the Rich Man

From Conservapedia
(Redirected from Lazarus (Parable))
Jump to: navigation, search 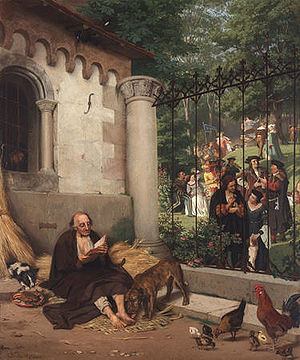 Though it is generally considered a parable, because Jesus used a proper name to describe the beggar (as opposed to a generic term, such as "a sower" in The Parable of the Sower), there is a school of thought which believes that the story actually references a real account of two real people (though that school does not discount the story being only a parable; the rich man is not specifically named).

In the story, Lazarus is a beggar unable to provide for his own needs. He lives outside the gate of the rich man's home, begging for the mere crumbs falling from the rich man's table; however, the rich man ignores his pleas.

Both Lazarus and the rich man ultimately die: Lazarus goes to "Abraham's Bosom" and is comforted, whereas the rich man goes to Hell where he is tormented. The rich man begs Abraham to send Lazarus to dip his finger in the water and then touch him to help relieve his torment, but Abraham tells him that is not possible as there is a chasm that can not be crossed.

The rich man then begs Abraham to have Lazarus warn his four brothers still living on Earth, but is told they already have Moses and the Prophets. The rich man says if they saw a dead man they would listen, but Abraham tells him even if a man rises from the dead, they still would not believe. (The latter conversation is considered to be prophetic of Jesus' own resurrection, yet still being rejected by the Jewish people.)

In the Medieval period, Lazarus was venerated as a patron saint of lepers by the Roman Catholic Church.