Law and order was a powerful conservative theme in the U.S. in the 1960s. The leading exponents in the late 1960s were Republicans Ronald Reagan (as governor of California) and Richard Nixon (as presidential candidate in 1968). They used it to dissolve a liberal consensus about crime that involved federal court decisions and a pushback against illegal drugs and violent gang activity. White ethnics in northern cities turned against the Democratic party, blaming it for being soft on crime and rioters.

Two developments were involved. After the first civil rights laws were passed, rebellions by lower class blacks broke out in over 100 cities, with nights of violence against police and looting and burning of local white-owned businesses. The inner neighborhoods of many major cities, such as Detroit and Newark, were burned out. National Guard and Army troops were called out. At one point machine gun units were stationed on the steps of the Capitol building in Washington to prevent rioters from burning it down. Every summer from 1964 through 1970 was a "long hot summer." Whites and Hispanics did not riot.

Second there was a dramatic rise in violent street crime, including drug-related murders, as well as armed robberies, rapes and violent assaults. Inner city neighborhoods became far more violent and people tried to move out to safer areas. The number of violent crimes more than tripled from 288,000 in 1960 (including 9,110 murders) to 1,040,000 in 1975 (including 20,510 murders). Then the numbers levelled off.[1] 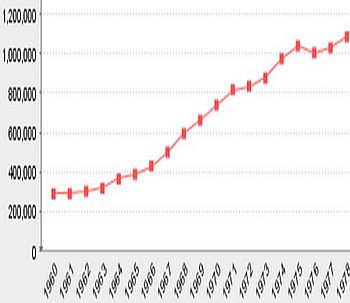 Violent crime in US, as reported by FBI

First introduced by Barry Goldwater in his ill-fated run for president in 1964, "Law and order" punished Lyndon Johnson and the Democrats and propelled Reagan to the governorship in 1966 and Nixon to the White House in 1968.

Liberals, Flamm (2005) argues, were unable to craft a compelling message for anxious voters. Instead, liberals either ignored the crime crisis, claimed that law and order was a racist ruse, or maintained that social programs would solve the "root causes" of civil disorder, which by 1968 seemed increasingly unlikely and contributed to a loss of faith in the ability of the government to do what it was above all sworn to do-protect personal security and private property. Conservatives rejected the liberal pipe dream. "How long are we going to abdicate law and order" House GOP leader Gerald Ford demanded in 1966, "in favor of a soft social theory that the man who heaves a brick through your window or tosses a firebomb into your car is simply the misunderstood and underprivileged product of a broken home?"

Flamm (2005) documents how conservatives constructed a persuasive message that argued that the Civil Rights Movement had contributed to racial unrest and Johnson's Great Society had rewarded rather than punished the perpetrators of violence. Conservatives demanded that the national government should promote respect for law and order and contempt for those who violated it, regardless of cause. After Reagan took office in 1981 and started appointing tough conservative judges, the law became as weapon against crime. Conservatives at the state level built many more prisons and convicts served much longer terms, with less parole. By the time they were released they were much older and thus much less violent.

The term goes back in American history to the 1840s, when the "Law and Order Party" was formed in Rhode Island to oppose the rebels in the Dorr War in 1846. In 1855 it was the name of the pro-slavery party in Kansas, and in 1856 the name of the group that opposed vigilantes in San Francisco. Various local parties have adopted the name as a citizens' protest against the failure of local law enforcement. For example, in Newark, NJ, in 1879 local Presbyterian, Methodist and Baptist ministers formed the Law and Order Association[2] to vote out the corrupt city government. Reagan stars with Dorothy Malone in 1953

By the 1950s movie lore made "law and order" the duty of the sheriff confronted with criminals in the West, as the 1953 Reagan movie poster suggests.