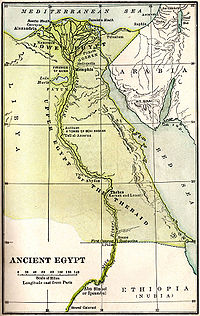 Karnak is located at Thebes
Karnak Temple is the largest complex of religious structures ever built by man. It is located on the northern edge of the modern town of Luxor, Egypt, on the west bank of the Nile. The complex housed shrines and dedications to many gods of the Egyptian pantheon, but by far the most important was Amun-Ra, and the Theban triad consisting of Amun-Ra, his consort, Mut, and the Theban falcon headed god of conflict, Montu.

The oldest surviving artefact from the temple dates to the 11th Dynasty, though the complex expanded most rapidly during the New Kingdom period, particularly the 18th and 19th Dynasties, though embellishments took place over a period of more than 2,000 years, with current excavations having recently uncovered a bath house added by the Romans during their occupation of Egypt. The temple was at the heart of the cult of Amun-Ra, and at its height his estates claimed a workforce of tens of thousands of men, hundreds of thousands of cattle and a private fleet of trading ships with a trading network spanning the Red Sea and Eastern Mediterranean. The estates lay at the economic heart of Egypt and it's main temple, Karnak, has been described at its height as a “Powerhouse of Imperialism”. In many ways it functioned both as an expression for the Egyptian view of the cosmos, the role of gods, the state and the individual, and also as a “holding company” for state assets. Later in the New Kingdom, during times of inflation and industrial unrest, the vizier was authorised to use funds and resources from the Estate of Amun-Ra to pay state workers in the Royal Necropolis.

The complex as it stands today has been considerably cleared and conserved by various archaeological missions, and numerous older structures that had been dismantled to make way for later additions have been recovered and reconstructed in an “open air museum” within the temple complex. Structures here include the Chapelle Rouge (Red Chapel) of Hatshepsut and the Alabaster Chapel of Amunhotep I as some of the more notable structures.

During work examining the interior structure of the 2nd Pylon of the Amun-Ra temple, archaeologists discovered vast numbers of small talatat blocks that had been recycled from the dismantled temple to the Aten built by the heretic 18th Dynasty ruler Akhenaten. These were removed to the Luxor Museum, where they have been made into a wall display, allowing the decorative theme of the Aten temple to be reconstructed and viewed by visitors.

The temple is one the main tourist attractions in the city of Luxor, and receives almost one million visitors per year. At night, the Amun-Ra precinct is the centre of a sound and light show, watched by visitors from a specially build “grandstand” erected by the Sacred Lake.

The complex comprises three main temples, or precincts. The precinct of Amun-Ra is the largest, and the only one that is visited by most modern visitors. It was connected directly the Nile waterway by a canal and its own harbour, featuring two docks, allowing ships to berth both in the inundation and at other times. It is connected to Luxor Temple, 2.5 km to the south by a processional avenue (currently being excavated, as of 2009) and also to the precinct of Mut, immediately to the south. The temple is unusual in that it feature two main axis, the East-West Axis, leading to the river, First Pylon, Hypostyle Hall and Sanctuary. The North South Axis extends mostly to the south from the temple core, though a series of pylons and open courts. The temple expanded outward from the core. Thus, the First Pylon is also the newest, being built in the Late Period, most likely by Nectanebo I.

The precinct of Mut, is the southernmost of the three, and is currently being excavated by a team from the Brooklyn Museum, New York. It features a large, crescent shaped Sacred Lake. It is linked to the prescient of Amun-Ra by a processional avenue lined with sphinxes.

The precinct of Montu is the northern most section, and is separate to the other sections. It is also significantly smaller.