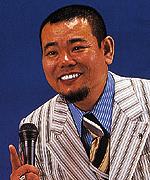 Karaoke from Japanese: kara empty, and ōke, short for ōkesutora orchestra (meaning without orchestra). It is a form of entertainment involving the use of a musical device that plays instrumental accompaniments; vocals are provided by a live person (amateur singer) with a microphone. Typically, this is performed in front of a group of people, with the aid of scrolling words flashing on a monitor.

Some people agree that Karaoke started in Kobe (At the Utagoe Kissa bar). Despite karaoke's worldwide popularity, the man who invented it, Ig Nobel Prize winner Daisuke Inoue has made little profit as he failed to patent the machine. [1]

The fad spread into bars and restaurants and, even if the person singing wasn’t very good, they were applauded at the end. Some people would sing lots of songs and some would only sing one but karaoke brought the people at the venue together in a whole new way. [2]