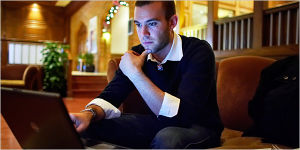 Jon Favreau at work the night of the New Hampshire primary.

Jon Favreau (Age: 26) is the chief speech writer of candidate Barack Obama. Graduated from the College of the Holy Cross in Worcester, Massachusetts, he served as a speech writer for John Kerry in 2004. Favreau was the architect of Obama's teasing "announcement" during an appearance in December on "Monday Night Football." [1]

Favreau is not the actor who played the lovelorn Mike Peters in the movie "Swingers."

For his inspiration, Mr. Favreau said, "I actually read a lot of Bobby Kennedy."

Jon Favreau is a fan of the Boston Red Sox.