Irreligion and the treatment of horses

Although horses are seen as an intelligent animal by many and a useful partner in getting work accomplished in many areas around the world, there are irreligious countries that also see horses as a source of food.[1]

Below is material related to irreligion and the treatment of horses:

Irreligion and the consumption of horse meat

Geographical location of most of the irreligious

Razib Khan points out in Discover Magazine, "most secular nations in the world are those of East Asia, in particular what are often termed “Confucian societies.” It is likely therefore that the majority of the world’s atheists are actually East Asian."[3] See: Asian atheism and China and atheism

Irreligion and the eating of horse meat

China produces more horse meat than any other country in the world, creating nearly half of the world’s supply of this animal protein.

The reason why it is considered a dangerous animal protein is that horses are often given a medicine called phenylbutazone [or “bute” for short] that is dangerous to humans.[4] 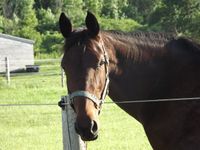 In France, specialized butcher shops (boucheries chevalines) sell horse meat, as ordinary butcher shops were for a long time forbidden to deal in it. However, since the 1990s, it can be found in supermarket butcher shops and others.[6]

Due to its past, namely the anti-clerical French Revolution and its after effects, France has the 8th highest rate of atheism in the world with 43–54% of the population being atheists/agnostics/non-believers in God.[7] In 2015, it was estimated that at least 29% of France's population identifies as atheists and 63% identifies as non-religious.[8]

On January 8, 2019, Wikipedia (an online encyclopedia founded by an atheist and agnostic) declared:

Smoked/cured horse meat is widely available as a cold cut under the name hamburgerkött (literally hamburgermeat).[10]

Sweden is one of the most atheistic countries in the world and the website adherents.com reported that in 2005 46 - 85% of Swedes were agnostics/atheists/non-believers in God.[11]

On January 8, 2019, Wikipedia declared: "Irreligion is prevalent in Iceland, with approximately 10% of the population identifying as "convinced atheists" and a further 30% identifying as non-religious. Since the 20th century, irreligion has seen steady growth."[13]

Irreligious Britain, sexual mutilations of horses and stabbings of horses

Between 1983 and 1993 more than 160 horses were sexually mutilated and stabbed in Britain.[17] British police and animal experts have put the blame on fertility cults, rival horse owners and sadists for the attacks.[18]