Housing refers not only to any house but also to houses collectively. In the United Kingdom the department of government that is concerned with the nation's houses is known as the "Ministry of Housing".

Housing prices in parts of the U.S. (especially California and Florida), as well as parts of Europe (such as Ireland) escalated rapidly 2001-2006, then crashed, helping to bring on the Financial Crisis of 2008 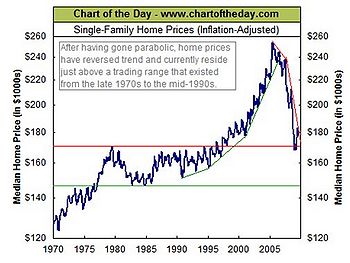 The housing bubble burst in 2006-07, as prices plunged downward in the Sunbelt. Many speculators and homeowners could not meet their payments, especially those who had "sub-prime" mortgages because their income was too low to support the eventual monthly payments, or who had adjustable rate mortgages where the monthly payments started small then escalated. Foreclosures skyrocketed. With housing prices falling few people risked buying a new house (because it would soon be worth less than they paid for it). Construction firms had built millions of new houses that could not be sold but which glutted the market. By late 2008 half the home sales in the U.S. were by banks selling houses they had foreclosed on at low prices.

The problem was that no one could figure out what CDOs were now worth, so very few were willing to buy them. One major investment bank, Merrill Lynch, sold its CDOs for 22 cents on the dollar—a "fire sale" price that was less than they were worth in the long run, because in the long run the great majority of people will make their scheduled mortgage payments.

As the Recession of 2008 continues into late 2009, the housing industry is far from recovery.