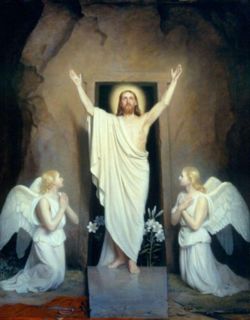 One of the first harvest lessons of the New Testament is that Jesus Christ "is risen from the dead, and has become the first fruits of those who have fallen asleep" (1 Corinthians 15:20)

The modern term "holiday" is derived from "holy day".

The Biblical Holy Days identified in the Hebrew Bible, (also called feasts or festivals) occur during those times of the year around the world equating to the early-spring harvest, late-spring harvest and early-autumn harvest in Israel.[1] God had commanded seven feasts in Old Testament times, prior to the coming of the Messiah. The themes stressed these days portray God's spiritual harvest of mankind to eternal life as spoken of by Jesus Christ in John 4:35-38.[2]

The great majority of Christian denominations, however, celebrate Holy Days that recall events from the New Testament, such as Easter and Christmas, even though the exact dates of the events memorialized are not known and the observance of them is nowhere commanded in the Bible. Very few Christian churches have retained the festivals that are described in the books of the Old Testament, but the churches that descend from the former Worldwide Church of God founded by Herbert W. Armstrong in the twentieth century are known for calling upon Bible-believers to resume the observance of them. While they consider these Hebrew Holy Days to be eternal and obligatory, most Christian churches believe them to have been superseded by the work of Christ and the founding by him of his own church with its own standards.[3]

The New Testament shows Jesus Christ observing the existing Holy Days of His people, and His disciples continuing that practice after His death, burial and resurrection. The early Church maintained the old holidays for some generations, then progressively adopted new holidays based upon the life of Jesus, doing so in the belief that Christ had taken the church from Law, i.e. ritual, to Grace, i.e. freedom in such matters.[4]

The feasts in Judaism

The feasts correspond to those still observed in Judaism as follows: