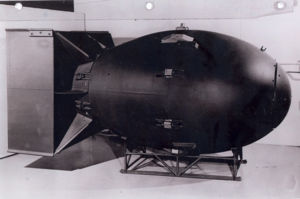 A replica of the Fat Man.

Fat Man was the name given to one of the two types of atomic bombs first produced at Los Alamos.

Fat Man had a radioactive core of plutonium. The bomb ignited through the "implosion method," whereby the explosives surrounding the plutonium exploded, setting off a shock wave that compressed the plutonium so much that it set off a nuclear explosion.

Fat Man bombs were used at Trinity (atomic explosion) and on the civilian population of Nagasaki, on August 9, 1945.