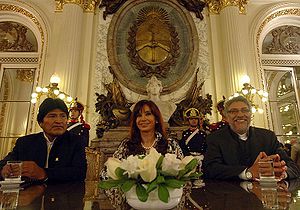 The Wiphala flag, used by the Evo Morales Government alongside the Bolivian National Flag.

Evo Morales (born 1959) was the president of Bolivia from January 2006 until November 2019. He has been Bolivia's first indigenous president, and is the leader of the Movement for Socialism (Spanish acronym MAS, for Movimiento al Socialismo) party. He was succeeded by Jeanine Áñez.

In December 2009 Morales won a second term by a landslide, with 64% of the vote,[1] while MAS won a two-thirds majority in Congress. This result allowed him to implement a new constitution granting new rights to indigenous peoples and to strengthen state control over the economy, which conservatives have denounced as socialism similar to that of Hugo Chavez in Venezuela.[2]

In his tenure, Morales nationalized energy companies, mining corporations, and telecommunication firms, leading to a large deficit. His economic policy was based on the politics of Cuba and Venezuela.[3]

He is strongly in favor of the Indigenism ideology, even renaming Bolivia's official name to "Plurinational State of Bolivia" and using an indigenous flag along with the national one.

Evo Morales demands that Chile cedes part of its territory to Bolivia to have direct sea access since his country lost the War of the Pacific. Bolivia has a lot of royalties in the Chilean ports according to the 1904 Treaty which gave Bolivia free transit and free port rights.

Morales sued Chile in the International Justice Court to obligate Chile to negotiate territorial transfer, however, he lost.

After mass protests over his disputed and even unconstitutional (violation of term limits) presidential re-election in October 2019 and a quasi-ultimatum form the heads of the armed forces and the police, he stepped down on Sunday, November 10.[5] He received political asylum in Mexico.[6]