From Conservapedia
Jump to: navigation, search
The English Civil War was a series of conflicts that lasted from 1642 to 1651 between supporters of King Charles I, known as royalists or cavaliers and supporters of the English parliament, known as parliamentarians or roundheads. The King lost and was executed. The new ruler was Oliver Cromwell. It formed part of the "Wars of the Three Kingdoms." 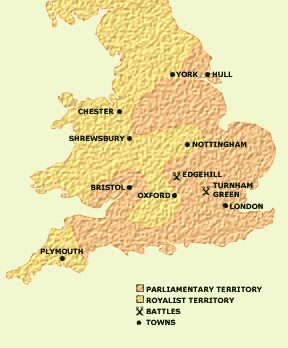 The situation in the autumn of 1642

King Charles I ascended to the thrones of England, Scotland and Ireland in 1625. At that time the monarch had the sole power to enact laws but relied on parliament to enforce the collection of taxes. Charles proved to be a poor politician. He treated parliament with contempt and as a consequence divisions grew between the king, who stubbornly refused to consider parliament's petitions, and parliament who were increasingly reluctant to cooperate in raising funds for the king. Puritans in parliament were suspicious that the king would undermine the Protestant character of the Church of England following his marriage to a Catholic princess. Divisions between the two sides came to a head when parliament attempted to impeach one of the king's military commanders after a failed intervention in support of the French Hugenots in 1627. Charles responded by dissolving parliament, but finding himself short of funds he assembled Parliament a year later and was forced to accept the Petition of Right in return for the funds he needed. Parliament was dissolved again in 1629, and Charles ruled without parliament for a further 11 years known as the Eleven Years Tyranny. Over the next decade Charles angered Puritans in England by introducing what they saw as Roman Catholic practices into the Church of England and by imposing fines on those who didn't attend Anglican services. When he attempted to introduce these reforms into Scotland he was met with a violent rebellion. The king's armies were defeated and he was forced to concede the independence of the Scottish Church. Charles tried twice more to defeat the rebels but this only resulted in the Scots armies occupying much of Northern England and Charles was forced to pay protection money to them to prevent the pillage of the area. Desperately short of money and with a weak army unable to defend England, Charles was forced to recall parliament in 1640. Parliament took advantage of the king's weak position by forcing him to recognise the right of parliament to assemble regularly, with the passage of the Grand Remonstrance, and restricting his tax-raising powers. Parliament inflicted further humiliation on Charles when they arrested and executed the king's chief advisor on a charge of treason for granting concessions to Irish Catholics, sparking a rebellion in Ireland. Enraged by parliament's actions Charles lead an attempt to arrest parliamentarians for treason. He failed, and now war was now inevitable.

Fearing for his safety Charles left London, and toured the country to gain support for his cause, making Oxford his base. Parliament responded by recruiting its own armies. The royalists got the better of the early battles but their advances had been halted by the autumn of 1643. Charles reached a compromise with the Catholic rebels in Ireland to free up troops for the fight in England. In 1644 parliament made advances in the north thanks to a pact with the Scots, but suffered reverses in the west. In 1645 parliament formed the New Model Army under the command of Thomas Fairfax and Oliver Cromwell. At the Battle of Naseby in 1645 the royalist forces were decisively defeated. After further defeats the king placed himself under the protection of the Scots armies, who were involved in their own civil war. England was now under the control of an uneasy alliance between Parliament, the Scots and the Army, who had become a powerful independent force.

Whilst a prisoner of the Scots, the king negotiated an agreement to introduce religious reforms in Scotland in exchange for supporting a royalist rebellion in England. In 1648 a series of royalist rebellions broke out in England. After some initial reverses Army forces lead by Fairfax and Cromwell achieved a series of crushing victories that culminated in the defeat of the royalist and Scots armies at Preston.

Execution of the King

Despite the betrayal by Charles most parliamentarians still believed that Charles could be retained as ruler; a minority argued that he could not continue. The Army took matters into its own hands and prevented from attending parliament most of the members still sympathetic to Charles. They then ordered parliament to try Charles for treason. He was found guilty and executed on 30 January 1649. The monarchy was abolished and a republican government was instituted in England under Oliver Cromwell, the Puritan general. Charles II succeeded his father as king of Scotland and immediately attempted to reclaim the English throne, but was easily defeated by Cromwell's army and narrowly escaped to exile in France. Charles I died well and was regarded by his followers as a saintly martyr, a status that made it easier for Charles II to restore the throne in 1660.

Following the king's execution parliament was composed of a mixture of religious independents, presbyterians and conservatives. Greater toleration was granted for religious independents (although Catholicism was still repressed) and a number of religiously inspired laws were passed including the closing of theatres and the enforcement of Sunday observance. Meanwhile, Cromwell sought to eradicate opposition in Ireland where royalists had made an alliance with Irish Catholics. Between 1651 and 1653 Cromwell's army completed a brutal conquest of Ireland.

Acting on fears that parliament would begin to assert its independence from the army, Cromwell dissolved parliament in 1643 and replaced it with a hand picked parliament, but the new parliament was unable to find agreement between religious radicals and moderates and in December 1643 Cromwell dissolved parliament and installed himself as Lord Protector, effectively a military dictator. In the end, however, the monarchy was restored, but in a much weaker position compared to a greatly strengthened parliament. Charles II (the son of Charles I) became a popular king for his hedonistic lifestyle, a dramatic change after the puritanical Cromwell (who even banned Christmas).