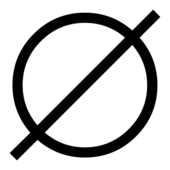 The empty set is unique, since any two empty sets have precisely the same members (that is, none) and is a subset of every other set.

Empty Set as a symbol for atheism

The empty set symbol, ∅, was originally suggested by Wayne Otero as a symbol to represent atheism and was derived from a letter in the Norwegian and Danish alphabet. It asserts the idea that there is no God and shows the obvious spiritual emptiness of atheists. A zero is another similar symbol that's been used.