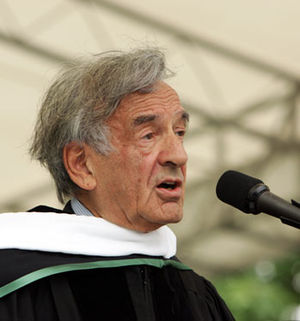 Eliezer "Elie" Wiesel (September 30, 1928 - July 2, 2016) was born in Romania. Wiesel is the author of 36 books dealing with Judaism, the Holocaust, and the moral responsibility of all people to fight hatred, racism and genocide. He survived being in the most dreaded of the concentration camps; Auschwitz, Buna, Buchenwald and Gleiwitz. After the liberation of the camps in April 1945, Wiesel spent a few years in a French orphanage and in 1948 was admitted and began to study at the Sorbonne.

He received the Nobel Peace Prize in 1986 for his various humanitarian works.

Wiesel's first book, "Night", records his experience, the experience of all of the Jews sent to the camps:

"The opposite of love is not hate, but indifference."